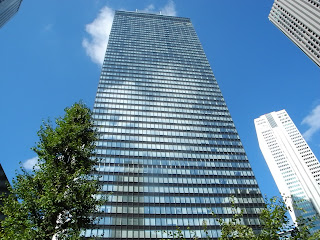 Another wonderful day out there. Quite reflective of the late spring and early summer. It's just like that photo above with the blue sky shining off that skyscraper in West Shinjuku there. I will be heading off in a couple of hours to a friend's place up in Richmond Hill for a nice little dinner party but still wanted to get this one article peeled off before I go.


Last night, I pulled the trigger again and purchased a few City Pop albums including this one, "Heart to Heart" (1978) the debut release by the relatively unknown Rajie. Part of the reason that I got it was I have enjoyed her brand of music especially this one track, and the album itself makes quite a contrast with her 3rd album "Quatre"  (another acquisition) from 1979 which has more of a technopop flavour.

"THE TOKYO TASTE" wasn't only a track on that first album but also the B-side to Rajie's 3rd single, "Cool Down" from 1978. And although the song says "Rajie featuring Yoshitaka Minami", I think the mellow Minami（南佳孝）shares equal billing with his duet partner in this one. They would get together again in the aforementioned "Quatre" for one number "Tokidoki Mahou"（ときどき魔法...Sometimes Magic）.

The song itself is a cool and light funk piece that actually didn't have Minami creating it. Minami was just the singer here. Instead it was YMO drummer Yukihiro Takahashi（高橋幸宏）and YMO associate Chris Mosdell taking care of the lyrics while Takahashi also provided the music alongside Tsugutoshi Goto（後藤次利）. It's quite nice to listen to while strutting down the hotel-laden streets of West Shinjuku around sunset with the slightly loopy lyrics describing some cool and light fun downtown. Considering the title and how I have described it here, I would think "THE TOKYO TASTE" would have made for the ideal jingle for a menthol cigarette commercial.

In any case, I am looking forward to getting my copy of "Heart to Heart" in the next few weeks.
Posted by J-Canuck at 2:47 PM