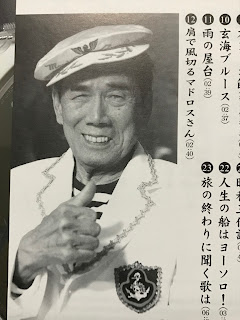 Although I'm a fan of Yoshio Tabata (田端義夫), it took me quite a while to get myself one of his albums. I had meant to get it a couple of years ago but only got it a couple of months ago, since most of his songs are readily available online and, as a result, other albums/singles by other singers are prioritized over his during my CD hauls. Only after tuning in to a video playing his BEST album from 1965 was I reminded to get something of that sort. And so I got his 68th anniversary album,"Osu! Tabata Yoshio Meikyoku Shu" (オース！田端義夫名曲集), that's even got a recorded message of the still spunky (at that time) 88 year-old ryukoka singer mentioning how far he's come in the entertainment world - feels special to be listening to what he had to say.


Moving on, out of the all the tracks I was formerly unacquainted with, "Chonmage Mambo" (ちょんまげマンボ) and "Zundoko Bushi (Machi no Date Otoko)" were the two I enjoyed the most. The former is absolutely boisterous and the way a young Batayan goes "OSU!!" in every stanza is cute, but I've yet to fully make out what on earth is going on there so I've decided to write about the latter, which is something I'm more familiar with.


A comparison of the "Zundoko Bushi" versions (Hikawa's, Kobayashi's, and Tabata's).

As I had first learnt upon being acquainted with enka, there have been many variations of the "Zundoko Bushi" over the decades, the most popular of which are those by action star Akira Kobayashi (小林旭), enka prince Kiyoshi Hikawa (氷川きよし), and comedy group The Drifters. All have a Latin flavour and the rhythmic "Zun, zun, zundoko" to kick things off, with only the number of "Zun-s" and lyrics varying in each version. On the other hand, Batayan's rendition differed quite a bit from what I had just described. For one, it follows the original war song in the sense that he goes "Toko, zundoko, zundoko" instead. Then there's the just as catchy, happy-go-lucky arrangement fronted by the low twang of Tabata's famous electric guitar that's much more 40's/50's rock'n'roll than it is Latin. I found myself liking this arrangement very much and I tend to listen to it when weary as it never fails to lift my mood. Perhaps it was meant to do just that, considering it was released not long after WWII in 1947.


This "Zundoko Bushi", also called "Machi no Date Otoko" as its lyrics were about a Date Otoko's (dandy guy) love story, was the first pop music take on the naval ditty. According to the J-Wiki, it was a hit back in the day. Sadly though, it doesn't seem to be featured on kayo shows often (if at all) in this day and age. Penning the lyrics to "Zundoko Bushi" was Einosuke/Hanosuke (?) Sasaki (佐々木英之助), and composing it was Hachiro Noshiro (能代八郎). 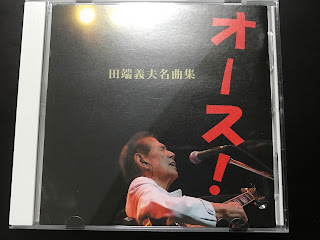