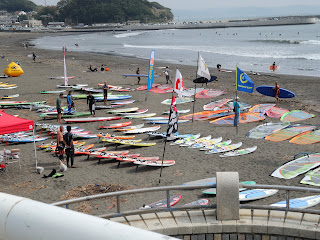 Although I was never a beach bum myself, I do remember going to Cherry Beach by Lake Ontario as a (relatively) wee lad, and then jumping into one of the smaller Great Lakes. Not to say that it is a crystal-clear body of blue water right now, but back then, it was definitely a soup of something not really healthy. I came out of my diving experience feeling rather slathered in lotion with all sorts of pill bugs crawling over me. I guess I was too young to be disgusted since I don't recall feeling much of anything as I emerged (maybe it was shock...being a buffet for some woodlice can do that to you). My mother on the other hand was in all likelihood none too pleased.

There is also the Don River which feeds into Lake Ontario. At the time, it had possessed a notoriety of being one of the world's most industrialized rivers (very politely said). In fact, our local joke was that in winter the Don didn't so much freeze as it actually gelled.


All right. Enough talk of environmental horrors although it is one of my earliest memories of the beach. Now, let us segue into an oldie that I was reminded of just a few hours ago as I was watching the latest episode of NHK's "Nodo Jiman"（のど自慢）. One fellow who had been trying to get onto the program 14 times finally got his wish and got to appear (mind you, he only got the two dings of the bell), and he sang this chestnut "Omoide no Nagisa" (Memory Beach).

I first heard this Group Sounds classic back on "Sounds of Japan" in the early 1980s and had assumed that it was a Yuzo Kayama（加山雄三）tune, but actually it was first recorded by a GS group called The Wild Ones（ザ・ワイルドワンズ）. Looking at the cover of the single, these young lads hardly look mildly agitated, let alone wild, mind you.


"Omoide no Nagisa" was The Wild Ones' first single in November 1966, and was written and composed by Shigeki Torizuka（鳥塚しげき）and Kunihiko Kase（加瀬邦彦）who were two of the guitarists for the band, although the article for the song stated that all of the members had a hand in the lyrics. It's one of those gentle summer songs that brings forth images of the beach, a sunset and a nice breeze as the young folks look into the west and realize that the hot season is about to fade away for another year. The song was an immediate hit as it sold over a million records according to a July 1991 edition of the Yomiuri Newspaper.


The song was covered by a variety of singers and groups over the years, including a cover by 70s aidoru group Candies（キャンディーズ）a decade later. Their version of "Omoide no Nagisa" was recorded onto their 1976 live album "Kuramae Kokugikan Ichiman-nin Carnival Vol. 2 ~ Candies' Live"（蔵前国技館10,000人カーニバルVol.2 キャンディーズ・ライブ...Kuramae Kokugikan Sumo Arena 10,000-strong Carnival Vol. 2）.


A couple of years later in 1978, another straight-ahead version of "Omoide no Nagisa" was recorded by The Handers（ザ・ハンダース）. However, The Handers wasn't a singing group per se but actually a conglomeration of comedians from the TBS variety show "Ginza NOW!"（ぎんざNOW!）which ran from 1972 to 1979. Their cover was officially titled "Handers' no Omoide no Nagisa" (The Handers' Memory Beach), and although the arrangement was pretty much the same as the original, the schtick was that each of the guys sang their parts while doing an impression of another singer or celebrity such as enka singer Shinichi Mori（森進一）, R&B chanteuse Akiko Wada（和田アキ子）or even Mood Kayo legends The Cool Five.（クール・ファイブ）.

The only member of The Handers that I recognize is veteran impressionist Akira Shimizu（清水アキラ）who's been a mainstay of Japanese variety television for years and years. As for the derivation of the name for the band, apparently it comes from the fact that there were six members in the band so in Japanese we have "han"「半...half」 + "das"「ダース...dozen」.
Posted by J-Canuck at 4:20 PM

Email ThisBlogThis!Share to TwitterShare to FacebookShare to Pinterest
Labels: 1966, 1976, 1978, Aidoru, Group Sounds, Single, The Candies, The Handers, The Wild Ones