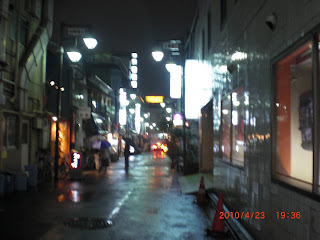 Woof! It's been a very long time since I put up an Aki Yashiro（八代亜紀）article with her as the solo subject. Maybe the most recent one was "Mou Ichido Aitai" (もう一度逢いたい) that was written up in July 2016, so yeah, it'll be five years.

This time, though, I have her 7th single from January 1974, "Shinobi Koi" (Secret Love). Ultimately, I've categorized this song by the husky-voiced Yashiro as an enka tune although it has that bluesy saxophone which I usually place with Mood Kayo. The rest of the arrangement makes "Shinobi Koi", a song about the struggles of keeping a romance quiet from the world around the couple, somewhat more delicate and innocent. So it's not so much of a drink-and-dance in a hidden watering hole or a tryst in a hotel but perhaps more of an affair being kept sub rosa within a small town. Certain instruments such as the strings keep things quite light and wistful.

Lyricist Keiko Yuuki（悠木圭子）and composer Jun Suzuki（鈴木淳）were behind the creation of "Shinobi Koi" which peaked at No. 13 and ended up as the 46th-ranked single of 1974.

As often as has been the case for many a kayo, "Shinobi Koi" ended up getting the film treatment as part of the "Yoru no Enka"（夜の演歌...Night Enka） series which includes movies that have been based upon hit kayo. Released in April 1974, its English-language title is far more sinister: "A Blood Stained Love Affair".