Sadao Watanabe -- Till We Meet Again 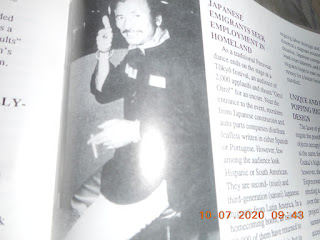 Another sunny and steamy day in the GTA. Some of my fellow Canadians have lamented that it's been a wet and cool summer but I sure don't believe it. It's been plenty warm here for me although we have gotten goodly buckets of rain now and then. Now that things have been opening up in Toronto for the past week in the province's Stage 3, I'm certain that many folks who have been starved for outdoor dining have been taking advantage and hitting the patios and going inside for a table. For now, Torontonians should be one pretty happy bunch.

I swear that jazz saxophonist Sadao Watanabe（渡辺貞夫）is one of the most perpetually happy musicians I've ever seen. Whenever he shows up in a photo, his beaming smile reaches my eyes before the rest of his face does. He also seems to hit some of the most picturesque settings as well such as certain parts of the Big Apple.

Well, the song "Till We Meet Again" in Watanabe's 1993 album "Earth Step" can also be described as blissfully happy. The title might be saying goodbye but that saxophone he plays is saying "Hello there! Come and stay for a while! The sangria is nice and cold." Maybe I'm stretching the analogy a bit here but it is an inviting track with not only Watanabe but also the dreamy keyboard action that could hint at either a gorgeous sunset afternoon or a clear night under the stars on the balcony part of a tony bar.