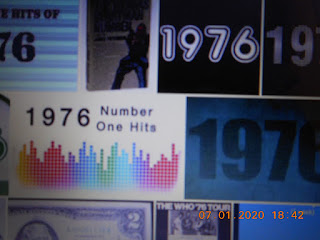 Wow! That's all I can say about "U.S. Time Machine", one of the tracks from Nagoya rock band Sentimental City Romance's（センチメンタル・シティ・ロマンス）August 1976 2nd album "Holiday"（ホリディ）.

On hearing this for the first time, I immediately got hit with images of American roots rock band Creedence Clearwater Revival and started wondering whether SCR had been inspired by CCR (which apparently broke up acrimoniously in 1972 according to their Wikipedia file). But not being too cognizant of 70s rock music in general, I might be off-base in my assessment since with "U.S. Time Machine", there is also a mellow smoothness in the arrangement which could also get it included in any of those "Light Mellow" compilation CDs. So, perhaps a comparison with the Eagles might be more accurate?

In any case, I just love the harmonies and the country rock with that rollicking beat and the steel pedal guitar, the latter especially in the middle of "U.S. Time Machine". It makes for the perfect car driving song through the United States itself, and it was quite the thing for this song to come out in the Bicentennial year for America. Masami Takeuchi（竹内正美）and SCR vocalist Tokuo Nakano（中野督夫）came up with the lyrics while Nakano brought together the melody.