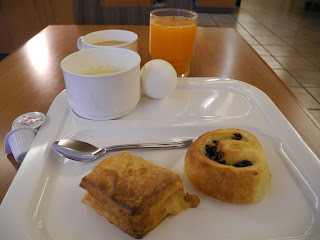 The above is a photo of my breakfast at the R&B Hotel in Otsuka, Tokyo when I had my last trip to Japan in 2017. It's a business hotel judging from the clientele and I really appreciated their washer-and-dryer facilities. Also, breakfast was fine, too, although sometimes just to jiggle up the variety, I enjoyed brekkie at the Royal Host next door.

Speaking on that morning theme along with the fact that I'm typing this on a Monday, I have "Mr. Monday Morning" by jazzy singer MIO (although she has been known as MIQ for the past twenty years). Mind you, I'm typing this well into the afternoon...generally, I don't blog in the mornings. Anyways, this was the title track from her December 1985 album and although it starts off sounding a bit like a technopop tune, those horns and the synth-bass reassure listeners of the genre that it's a good and funky City Pop number.

"Mr. Monday Morning" was written by the prolific Machiko Ryu（竜真知子）and composed by Masahiro Taniguchi（谷口雅洋）, and I really like it when MIO throws out that "Tell me why!" in the refrain for this song which sounds as if love might actually be coming to a couple. From that title, though, it might be about an amiable friends-with-benefits situation (although the term probably didn't exist back in the mid-1980s), so that love thing may not be as smooth as assumed.

I'd never heard of singer-songwriter Taniguchi but apparently he released an album "Communication" in 1980 which is considered to be one of the more hidden City Pop delicacies. According to this page, it got its CD release just last year. Judging from what I've heard of this particular song, I'm going to have to pay some attention to his works very soon. Also, I did write about another MIO tune with a morning theme earlier this year.