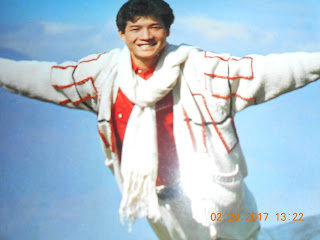 Wow! I guess that there must have been a thing among some aidoru back in the 1980s when it comes to that old-fashioned dance, the Charleston.
For those who may not have known about this century-old dance, you can take a look at the recreation of it above. I've seen it a number of times on cartoons, sitcoms and "The Lawrence Welk Hour" as a kid.
Not sure if there have been a lot of aidoru songs back then that gave their tribute to the Charleston, but I know at least two right now. There is Shojotai's（少女隊）"Motto Charleston" （もっとチャールストン）from 1986, and now I have found Toshihiko Tahara's（田原俊彦）"Charleston ni wa Mada Hayai" (Too Soon for the Charleston) which was his February 1984 17th single.
As would be expected with any song containing the word "Charleston" within its title, the music by Tomo Miyashita（宮下智）and arrangement by Kazuo Otani（大谷和夫）is jazzy, although I'm not sure whether the Big Band Swing nature had actually come into being when the Charleston was hot. But then again, the Wikipedia article for the dance points out that a slight variation based more on the Lindy Hop evolved to fit swing music.
Miyashita was also responsible for the lyrics where Toshi's protagonist is desperately courting a young lady for a date back in the day and would just love it for days for the opportunity to do the Charleston with her. Sorry to get a little picky with the performance above, but I'm not quite sure if Toshi is even attempting the Charleston and I don't think that the 50s-style teenyboppers behind him would fit the age of that particular dance. But then again, it's entertainment, isn't it?
In any case, "Charleston ni wa Mada Hayai" hit No. 2 on the Oricon singles chart and would later end up as the 31st-ranked single of the year. He even got to go onto the 1984 Kohaku Utagassen with this one for his 5th consecutive appearance. Apparently, the song was also used for a local commercial selling the Capri Sun drink, licensed under Glico.
For those who know their old-time jazz, you'll probably recognize that Miyashita adapted some of the melody from the Yiddish song "Bei Mir Bistu Shein" (1932) that was popularized into the jazz idiom and performed by acts such as The Andrew Sisters. I'd always thought that the title was "Goodbye, Mr. Shane!".
Interestingly enough, the last time I wrote about Toshi was way back in July 2016 and for that particular song, his debut single, it was also based on another song outside of Japan.
Posted by J-Canuck at 9:17 PM