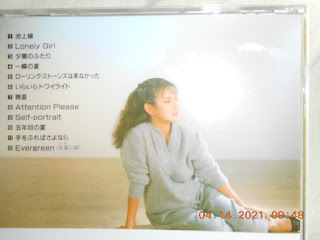 I think that singer-songwriter Mieko Nishijima（西島三重子）has a very loyal cadre of fans but she's one of the more underrated talents that have in the kayo world. She's gone through the gamut ranging from folk to City Pop, and a few years ago, I mentioned her in that list of Fashion Music singers since she can provide some of that laconic baroque version of kayo along with contemporaries such as Ruiko Kurahashi（倉橋ルイ子）and Mayumi Itsuwa（五輪真弓）.

Strangely enough, it is Kurahashi that I get reminded of when I listen to Nishijima's "Tentai Bouenkyou" (Astronomical Telescope), her 13th single from January 1982 and the lead track from her November 1981 album, "Lost Hour". Composed by the singer and written by Kenji Kadoya（門谷憲二）who has worked with her a number of times, "Tentai Bouenkyou" has that adorably folksy and innocent lilt to the melody. In fact, it's one of those tunes that I can't quite categorize within one genre. That squealing electric guitar that comes halfway adds some rock, of course, but I surmise that I can perhaps place it in either the straight pop or New Music veins.

In any case, it's a pleasantly relaxing song by Nishijima that doesn't so much talk about the wonders of astronomy but the circumstances surrounding the reason to visit the observatory. This time, a couple of students who may be on a school trip to see the stars realize as they share views through the telescope that there may be love coming between the two. Couldn't ask for a better opportunity to say "Awww!" than this one.