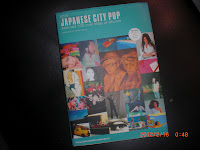 Early last year, I came across this book at the Shinjuku Station Tower Records. Now, my ability to read Japanese isn't exactly up to what is required of most Japanese people...around 2,500 kanji. But I was interested enough in the contents to invest my 1,890 yen, and I haven't regretted it.
"Japanese City Pop"is a catalogue of 500 selected albums which fit the category from 1970 to 2002. So, the names are a who's who from the Japanese music industry such as Yumi Matsutoya(松任谷由実） to Mr. Children, and they also include artists who never really registered into mainstream pop. I came across a large number of names whose CDs I was able to track down, such as Yasuhiro Abe(安部恭弘), for whom I've already written one entry, and Hitomi Tohyama(当山ひとみ） (to be listed later). Provided that you can read Japanese, this is a must for not just the City Pop fans but for any J-Pop fans who want to get a bit of history and know something outside of the usual aidoru or J-Rock/J-R&B circles. And if you can't read a certain entry, you can always send me a request since I do translate Japanese-to-English on the side.

My book is the first issue from 2002, but last October, Tower Records started selling the revised edition. And of course, you can always check out www.amazon.jp
Posted by J-Canuck at 3:40 PM