One of the great songs of the 1980s, "My Revolution" was custom-made for Misato Watanabe（渡辺美里）. The lyricist for the song, Masumi Kawamura（川村真澄）, said that she had a hand in the naming of the song after conversations with the singer in which she got the impression of Watanabe as a girl who could succeed on her own just through her own formidable strength. The composer for the song was TM Network's Tetsuya Komuro(小室哲哉） who was still some years away before he would start a musical revolution of his own during the 1990s through the production of artists such as Namie Amuro, Tomomi Kahala and trf.

Watanabe has always struck me as being a human ball of energy with a voice to match. A lot of her uptempo songs have her blowing off the doors such as "Summertime Blues" and "Suteki ni Naritai"(素敵になりたい）. And her concerts which used to be held annually at Seibu Lions Stadium in Saitama Prefecture were perennial favorites. She was one of the symbols of summertime in Japan.

"My Revolution" was released in January 1986 as Watanabe's 4th single, and hit the No. 1 spot in the Oricon weeklies before ending up as the 5th most popular song of the year. It also earned a Japan Record Award. The song was included in her 2nd album, "Lovin' You", a 2-CD pack that was the first one of its type created for an artist still in her teens (Watanabe was 19 at the time). 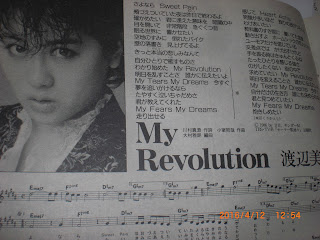