"Aventure" was the 5th solo album by Taeko Ohnuki（大貫妙子）, and the 3rd of her "French" albums, which was released in May 1981. It came in between "Romantique", her first full foray into a more European sound, and "Cliche", which mostly focused on a French style. "Aventure" had Ohnuki still extending into different genres. She continued to try French here as well, e.g.. "Ai no Yukue" (愛の行方...The Way of Love) . But there are also a couple of songs which have a Latin flavor such as the above "Samba de mar", "La mer, le ciel" , and a couple of minor, purely pop-for-fun tunes as well. It seems to have been a custom with Ohnuki that along with some of the sweeping epic songs that get on her Best albums, she also enjoyed throwing in some short flittery stuff. Ryuichi Sakamoto （坂本龍一）arranged half of the songs on this album, and just in the first song alone, there seemed to have been a New Music celeb reunion of sorts, with Sakamoto in there, former Sugar Babe bandmate Tatsuro Yamashita（山下達郎） handling chorus arrangement, the Daughters of RCA: Mariya Takeuchi（竹内まりや）, EPO and Ohnuki herself as the backup vocals, and YMO drummer Yukihiro Takahashi （高橋幸宏）also filling in.

The above is the first song on the B-side of the album, "Chance" (チャンス。。。when such things as LPs existed to a large degree way back when). This was the second pop-for-pop's sake song, and it's a fun little techno piece....could've made a cute theme for either a romantic-comedy or an anime.

﻿The final song here is "Grand Prix"  (24:28 on the video below). Even the beginning of the song has the sound effects of race cars revving up. The arrangement is 60s French jazz...the song wouldn't have been out of place in films like "Grand Prix" or "Le Mans".

To sum up with a French expression of my own, "Aventure" is an interesting potpourri.

Not sure how long it will stay up but apparently someone decided to upload the entire album!
Also, there is the follow-up for the rest of the tracks now. 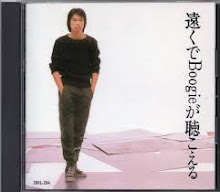