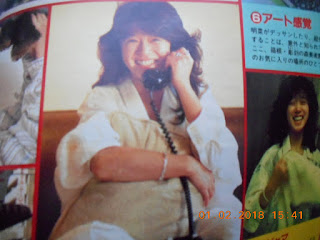 It's sometimes a bit jarring to see Akina Nakamori（中森明菜）now, and then compare her to how she started out in the music business over 30 years ago. When some of us Akina fans on the blog talk about her, we can't help but express some concern considering that fragility she has displayed for many years. And yet, my impression of her early days was that the Tokyo aidoru of the early 1980s had initially been groomed to be the anti-Seiko Matsuda（松田聖子）through her music: a punk girl in a school uniform with the big booming hairdo talking rough and tough. Perhaps she was the Rolling Stones to Seiko-chan's Beatles although some of those cute smiling photos of her in "Myojo" and "Heibon" magazines (as above) probably undercut that tsuppari image.


Being an Akina fan, it was those very early days of her career in the early part of the decade that I actually know the least about since my interest in her and her music didn't begin until the middle of the 1980s. So there is stuff to learn about still.

I've come across this track from Akina's 3rd album "Fantasy ~ Gensoukyoku"（ファンタジー〈幻想曲〉...Fantasia）which was released in March 1983 titled "Aitsu wa Joke". Now, as for a little bit of Japanese vocabulary information, aitsu isn't exactly the nicest word to use in public discourse since although it is technically defined as another word to represent the third-person singular (he/she), practically it can mean "that jerk" or worse. So perhaps in the intention of imbuing the translation with Akina's feelings, I will probably go with "Jerk's A Joke".

Written by the late Tsuzuru Nakasato（中里綴）and composed by Kuniko Fukushima（福島邦子）, "Aitsu wa Joke" has that sound that I've often associated with early aidoru Akina uptempo tunes: wailing electric guitar, sweeping-and-staccato strings and a slightly lower-than-usual aidoru voice that can straddle between defiance and pleading. I can also hear and understand why Nakamori had been compared to the big aidoru of the previous decade, Momoe Yamaguchi（山口百恵）.

Going through the song's lyrics, Akina spends virtually the entire song castigating a former beau as if he were the most offensive cockroach oozing from under the refrigerator only to give hints that her vitriol may just be a front until the very last line where she basically confesses that he still pines for the lug through the tears reflected in the mirror. I still haven't gone through many of Akina's songs during this time but thematically, the words remind me of one of her early hits "Shojo A"（少女Ａ）in which within all the tough talk, there is that vulnerable hidden center inside of her. Perhaps this was a common trait with her songs.

As for "Fantasy", it did hit No. 1 on the Oricon weeklies. Well, perhaps this can be another item on the wish list.
Posted by J-Canuck at 4:53 PM