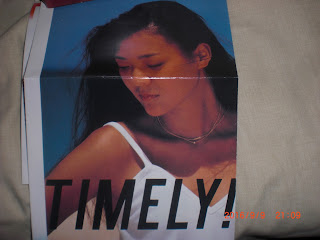 Kinda surprised that I hadn't included this song in my write-up on Anri's（杏里）15th album from 1991 "Neutral".


But perhaps that reflects well on the album since for me "Neutral" came out during Anri's heyday of many years in the 80s and into the early 90s. There are just too many fine songs to choose from. She could do no wrong at this point.

The track here is "Earring~Tears of Two" which was written by Yumi Yoshimoto（吉元由美）and composed by Anri (as was the case with all of the tracks on the album). The story has it that an old flame suddenly calls up a woman for the first time in many years, and the woman has to once more sort out all those feelings that she probably sealed up inside. But for me, it's the music that attracted me because of that battery of horns. So mellow. I could imagine someone coming up to Anri after recording and saying "Bobby Caldwell called. He would like his horns back." And considering how much of a legend Caldwell is in Japan, it's very possible that he and Anri could have met.
Posted by J-Canuck at 10:15 PM