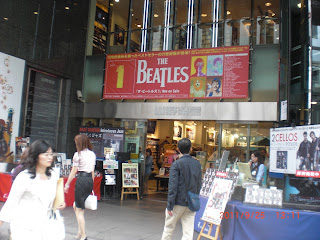 Yamano Music is the CD store that I had the longest relationship with. Located right at the main intersection in Ginza 4-chome（銀座４丁目）, it's very easy to find.

When I used to come on down from Gunma Prefecture to get that monthly exposure to city life back in the early 90s, Yamano Music was the first place I hit to search for those discs. It has never had that cool vibe of Tower Records or HMV, but like the outer structure that it inhabits, it's nice and solid. Often when there is a big artist promoting a new album, there is a huge poster overhanging the entrance and tables outside selling the discs with the songs blaring out the speakers.

The first floor has all the kayo kyoku/J-Pop albums and singles while the Western discs and DVDs can be located in the basement. As I said, the store is in a very central location. If you're coming on the yellow Ginza Line, just look for Exit A9 and walk upstairs. Once you reach topside, just walk a few metres ahead and it'll be on your left. It's open from 11 a.m. but best look out for Mondays since one Monday a month, the store closes for inventory-taking. The red Marunouchi Line and the gray Hibiya Line also stops at Ginza Station, in which case just search for the Ginza Line gates and then A9.

I have to also come out of my usual zone of kayo kyoku into that of Japanese foodie-ism, since there is a great tonkatsu (deep-fried pork cutlet) restaurant just across from Yamano Music. It's called Genkatsu,（ゲンカツ） and it is located in the Ginza Act Building on the 3rd floor. It's open from 11:30 a.m. and is famous for its mille-feuille tonkatsu...basically the pork is cut into 25 super-thin slices and fried as one piece. Fillings such as cheese and garlic can line the spaces between the slices! Gotta try it! The Act Building is located next to the mammoth Mitsukoshi Department Store（三越） on Chuo Dori （中央通り）。
Posted by J-Canuck at 2:09 PM