Well, it's been a couple of days since my last entries. Yesterday, I had a hell of a monstrous translation plus some horrible logistics which contributed to a very tense me. But strangely enough, I got my lone happy moment of the day when the good folks at Amazon.jp were able to deliver something to my mailbox that I had ordered several days prior:

Yup, it cost me a goodly sum of 6,478 yen, but since I am a fan of hers and her discs are getting rarer by the year, I wasn't about to let this opportunity pass. This is EPO's 4th album, "Uwasa ni Naritai"(I Want to Be Talked About), released in May 1982 Considering what she was wearing on the cover, I'd say that her wish probably did come true. I acquired this one since the first track was the Ray Parker Jr.-composed "Girl in Me", the fun disco tune that was my first profile of her on this blog. Very radio-friendly, it also happened to be the only single released from the original record. And there are a few more tunes that I've heard from this album since they've been included on her BEST compilations.

Track 5 is "Ame no Meguriai"（雨のめぐり逢い...Love Affair in the Rain), a ballad composed and written by EPO herself. The one thing I've liked about her is that she's always had this clear-as-a-bell, energetic voice for her uptempo stuff. "Ame"is a lovely tune but if she could have just softened her voice a bit more, it would've been that much more effective.


This is the title track, which starts off with a bit of a Latin piano riff before going into a happy-go-lucky melody about a young lady not trying too hard to hide an unseemly past from her new beau. I think if there has been a lyrical theme to EPO's repertoire, it's been cheeky fun....kinda like that best friend who always seems to get the hero/heroine in trouble. This video shows a concert medley with "Uwasa ni Naritai", "Girl in Me" and "Downtown".

The final track is a cover of the song that got her into the limelight, "Downtown". This version is even poppier and more radio-friendly. Although this song has EPO handling all of the vocal arrangements, the album has her usual co-horts, singers Taeko Ohnuki, Yasuhiro Abe, and Shigeki Miyata as backup singers. And her fellow RCA sister, Mariya Takeuchi comes in on one track titled "Secret Agent"as the English-speaking spy. The above, though, is a concert version.

Not all of the songs are winners. One of the last songs just has her blasting even more loudly which kinda reminds me of something being played at too much volume. Didn't even bother to confirm the title. Could be one of those "It'll have to grow on me"ones. 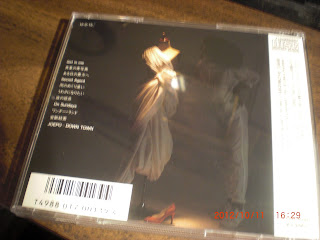