Life was not easy to Kazue Kato. She was a child star in a war-torn Japan and appeared in movies since 1949 using a artist name Hibari Misora (美空 ひばり) . She eventually became the most famous enka singer of Showa era and had her share of troubles as well. In 1957 she was confronted by an over-zealous fan, who threw acid to her face. Her brother was arrested for yakuza activities in 1973 and she was denied to participate Kouhaku utagassen. Offended, she refused to appear in the show for years afterwards. Her marriage failed in the 1960’s. Whenever Korean-Japanese relations were strained – and they are strained frequently –  there were gossips that she was actually of Korean ancestry.

In many ways Hibari Misora could have led a much easier life, but as all proverbs around the world can tell: music is made of sorrows. In 1987 she was diagnosed with avascular necrosis. Against all odds, she did recover, and recorded a triumphant song "Kawa no nagare no youni" (Like The Flow of a River). In interviews she repeated that she is not going anywhere and she can see many fruitful years ahead. Triumph didn’t last long. In June 1989 Misora Hibari died from pneumonia. Emperor Hirohito and Osamu Tezuka had passed away earlier the same year. 1989 was to be known in Japan as a year of losses.

Afterwards it was painfully clear that "Kawa no nagare no youni" was the summary of Misora Hibari’s own life: Many times I’ve been lost. There is no map for life either. To live is to follow this endless road, close to loved ones and looking for a dream. I want to follow the river forever, and listen to the gentle murmur of blue.

Composer Akira Mitake (見岳 章) was not actually an enka composer. He wrote songs to such acts as Tunnels, Hiroko Mita, and various Onyanko Club idols, in other words, not necessarily the front row of Japanese entertainment. The impressive lyrics were written by none else but Yasushi Akimoto (秋元 康) himself, cementing his place in the history of Japanese popular music.

Akimoto commented that the river of this song is actually East River in New York. “I had lived a year and a half in New York wondering what to do with my life. I stared at the East River from the window and I was thinking that maybe I go all the way to the river, to the sea, and let it lead me back to Japan. Akira Mitake brought the melody to New York in a cassette tape that I listened to with Walkman. The melody reminded me of the flow of a river and I wrote the lyrics in a café called Café Lantana, where we used to hang out.”

During the recording of "Kawa no nagare no youni" Hibari Misora came to sit next to Akimoto and said that the lyrics are good. She said that life is certainly like a flow of a river. It is sometimes straight and sometimes tangled, sometimes slow, sometimes fast, but at the very end all the rivers lead to the same sea. Akimoto couldn’t help thinking that those were profoundly deep words. “I think there is something terribly fateful in that song.”

The posthumous single release of Kawa no nagare no youni sold over 1.5 million copies. Today it is perhaps Misora Hibari’s best known song and an enka standard.

Let’s end with The Three Tenors. Here Pavarotti, Carreras and Domingo receive a standing ovation in Tokyo while singing phonetic lyrics originally written by a manager of a teen idol group.

Video embedding is disabled, but link should work. Meanwhile you can admire this photo. I have only one bromide in my possession, and naturally it shows the greatest of them all. 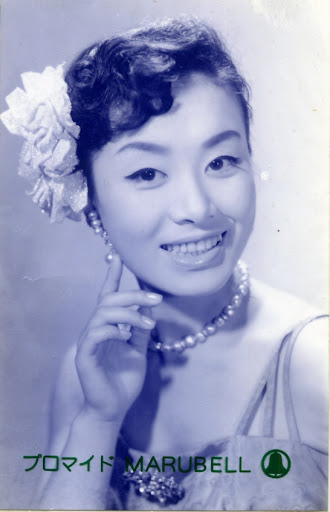