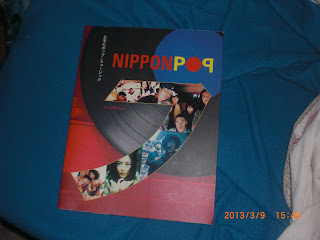 About a year ago, one of my first entries for the Media category was on "The Encyclopedia of Japanese Pop Culture", perhaps the first book totally devoted to the topic which had me racing to the nearest Kinokuniya shop. It was released in 1997, but then a year later, came this bigger book which seemed a nice fit on top of someone's coffee table....namely mine (mind you, my table in my Ichikawa apartment was also the breakfast, lunch, dinner, and work table).

"Nippon Pop" was first published in 1998 and authored by Steve McClure, the then-Japan bureau chief of Billboard Magazine and still a journalist in Tokyo. "The Encyclopedia of Japanese Pop Culture" was definitely designed to look like a thick tome, but "Nippon Pop" was formatted to have a slick and glossy magazine style like that of "Vanity Fair". I think it was about the mid-90s that J-Pop started to make inroads outside of its borders and onto the rest of the planet, so McClure struck the iron while it was hot. 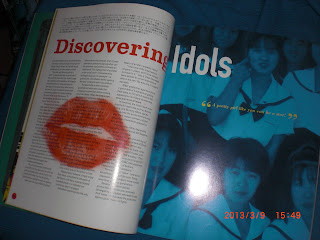 Obviously since this was a late-90s book, there will be nothing on Arashi or AKB 48 and I don't even recollect seeing anything on Morning Musume in there. It's no longer the cutting-edge book but it's still a good solid report on the state of Japanese popular music up to the last few years of the 20th century. So, you may not see AKB48 or Arashi but you will find out about their predecessors such as The Onyanko Club or SMAP. 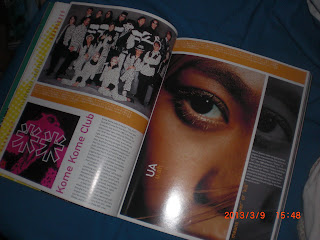 "Nippon Pop" is made for the person who is just starting to get curious about J-Pop. So, McClure provides a good grounding through its Benetton-coloured pages some bite-sized (or page-sized) pieces on the history of kayo kyoku/J-Pop and some of the highlight folks such as Seiko Matsuda(松田聖子） and Yumi Matsutoya（松任谷由実）, but the main thrust of the book is showing what the big trends and artists were as of the late 90s. UA and Kome Kome Club were really big back then as well as Dreams Come True and the Osaka bands of Sharan Q and Ulfuls. Shibuya-kei is also represented (Cornelius, Kahimi Karie)  along with techno (Ken Ishii, Denki Groove), Okinawan music and R&B. There are even some of the more eclectic artists such as United Future Organization and Hoppy Kamiyama. Alas, there are some things featured that have gone the way of the dodo such as the Velfarre dance club in Roppongi, the whole thing about Tetsuya Komuro, and HMV (except for that one little store in Shinjuku). 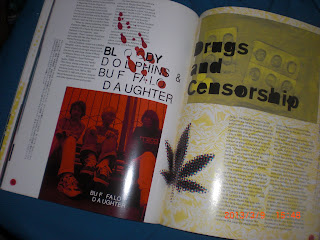 McClure also talks about some of the issues involving the music industry such as karaoke, the ubiquitious TV tie-ups between songs and dramas and the sensitivity of drugs not within the artists themselves but within the lyrics of their songs.

One of the other interesting things I found out about this book is that for each of the English entries, there is a Japanese translation discreetly written in very small type nearby. The Japanese, or let's say the Japanese media, have always had a keen interest in how the country and its culture are perceived overseas, so perhaps these little linguistic insertions are another example of that.

It is still available on Amazon for a much more reasonable price than the $26.95 originally charged. I read a few reviews that referred to it as being a necessary first step but nowhere near comprehensive. In McClure's defense, I can only say that I don't think it was ever his aim to be that comprehensive; again, the impression I got about "Nippon Pop" was that it was created more for the generalist than for the specialist. Even back then, I was more the latter than the former but I still appreciated it. And, well, it's been 15 years, so if McClure is not too busy, perhaps he can make another deeper strike at an updated and even more fact-filled book, or it'll just be up to us bloggers to keep providing the English-language stream of information going on this musical niche known as kayo kyoku/J-Pop. On the other hand, perhaps there is a book already out there that I don't know about....please let us know!