I was planning to do my first profile on Kaoru Sudo (須藤薫) at a later date when I'd be familiar with more of her work, but tides have turned as of late so I'd like to write about her today. Yesterday I received her Drops album in the mail, the first album by this singer to join my collection, and was really ecstatic about listening to it since I loved the samples from Youtube. While ripping the CD to my computer, I decided to look up the tracklist on her J-Wiki page for tagging. And then I found out that she passed away only two days ago at 58. Gutted. Listening to these tracks after the fact felt surreal indeed. I don't think I'm ready to give an overview on the whole album just yet, since it's still fresh in my mind, but I do want to talk briefly about one of my favorite tracks from it at the end of the post.

Sudo was a Tokyo-born singer and a graduate from business department at Dokkyo University who debuted in 1979 with the single "Yasashii Machi" (やさしい都会). In 1980 she teamed up with Eiichi Ohtaki (大瀧詠一) who produced one of her most famous songs, "Anata dake I Love You" (あなただけI LOVE YOU), among her other early works. Sudo would specialize in 60's style American Pop: similar to the stuff Gerry Goffin and Carole King wrote together. In those years, her songs had a sweet girly attitude that suited her frilly looks. Her low voice, though, always sounded sharp and mature. After a couple years, the singer-songwriter Masamichi Sugi (杉真理) became the primary producer of her music, writing her minor hit "Namida no Step" (涙のステップ). The two would cross paths ever since and even formed an appropriately named unit "Kaoru Sudo & Masamichi Sugi" in 1998. By the time Drops "dropped" on music shelves in 1983, Sudo was already a mature lady in her late 20's singing away to stylish West Coast Pop with production support of Masataka Matsutoya (松任谷正隆). The album only managed to peak at No. 49 on Oricon, but nowadays it's become a pricey gem sought by City Pop enthusiasts. Sudo's albums always attracted plenty of bidders on Yahoo!Auctions. Good luck obtaining her works now.

I chose to write about "Kokoro no Haikei" (心の背景) because I found it intriguingly haunting. The opening guitars never fail to punch me whenever I give this song a spin. It does mellow out after the intro with Sudo singing calmly and the low trumpet blowing in the background. Yet those guitars keep coming back throughout the song, now backed by a saxophone solo, punching me again and again. Would love to listen to this one while driving at night. As for credits, it was written by Masako Arikawa (有川正沙子), composed by Masakazu Togo (東郷昌和), and arranged by Matsutoya. 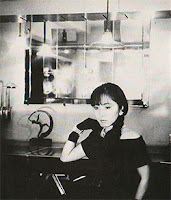