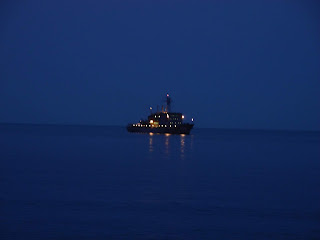 Looks like tonight's gonna be Takeshi Kaga（鹿賀丈史）night. I've already written on the theme song for his 1987 cop show "Jungle"（ジャングル）earlier, and now I've got something that he himself had recorded some years prior. The thing is that he's already got an entry on the blog and it happens to be a catchy synthpop march for the "Ponkikies" kid's show.


Ah, this one here from his 1981 album "After Dark" is a whole lot more adult and shibui. "Harbor Light" seems to be Kaga's emulation of the style of Akira Terao（寺尾聡）and his "Reflections" blockbuster which had also come out in the same year and ended up capturing the year as the No. 1 album. Incidentally, Terao was also acting in a hit cop show at the time.

In fact, City Pop listeners can be forgiven if they had first assumed that this was a Terao song. The laconic delivery is there as well as the wailing electric guitar and the downtown piano. Heck, even Hip Tank Records' description of the aptly titled "After Dark" described "Harbor Light" as being very Terao-esque. I couldn't find out who actually wrote and composed the tune although it was Akira Inoue（井上鑑）behind the arrangement, but I wouldn't be surprised if it was actually Terao helping out in the composition. The whole song has the hallmarks of Kaga and Terao sharing drinks at a local watering hole whether it be at Yokohama's Bar Polestar as shown on the album cover or some swanky joint on the top of a West Shinjuku hotel.

Given this tidbit from "After Dark", I'll have to see whether the album is available anywhere. Perhaps "Reflections" fans may also be interested in tracking this one down.
Posted by J-Canuck at 8:23 PM