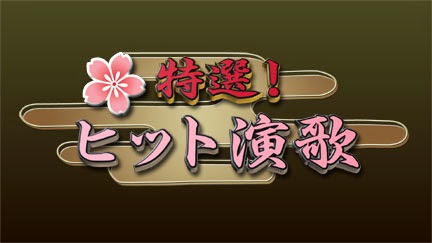 www.kayopops.jp
Well whaddayaknow, it's already December. I must say, there's been some really good Enka tunes released this year. We've got Takashi Hosokawa's (細川たかし) 40th anniversary song, the overly manly 'Enka Bune' (艶歌船), Masako Mori's (森昌子) cool Enka-Rock fusion 'Oiran' (花魁), Hiroshi Kadokawa's (角川博) elegantly delivered 'Yo Naki Dori' (夜泣き鳥). The list just goes on and on. But nothing beats listening to the classics! Ah yes, the classics. I've gotten to know many of such over the course of this year, ranging from the all the way back to the 50's to the relatively recent (in comparison) 80's.

So since I've had much exposure to the genre and being able to pen down my experiences with some songs, no matter how bizzare they can be, on this blog (courtesy of J-Canuck), I've decided to share my personal favourites on this list right here. With the criterion being how often I listen to them, narrowing down 5 was somewhat of a challenge since half of the ones that play on heavy rotation turned out to be Mood Kayo, in other words out of consideration. Enka, or anything that has the Enka label to it only.

Hmm, now that I actually look at it, my selection mostly features songs from different decades! Okay, I think that's enough talking. Let's head right on to it, shall we?

Haha, surprised to see a Mood Kayo group/singer here? Well, this hit barely managed to slip by as the J-Wiki considers 'Soshite Kobe' to be an Enka song! And then again, there is some hint of Enka in it for it to be included in the genre.

Moving on, what mostly draws me back to the very first song that introduced me to The Cool Five/Maekawa (Maekawa first) is its music, composed by dear Keisuke Hama(浜圭介)- rather dramatic start with the blare of the trumpets plus the occasional electric guitar slicing in. Then we've got Maekawa with his usual severe self crooning away, which eventually escalates to something so intense he looks like he's screaming it out at the of the top of his lungs. A really cool and interestingly delivered song. And it also was the song that made Mae-Kiyo... um... what's the best way to put it? Ah yes, 'Noelle's favourite old man' as my classmates dub it. I guess you could say I was asking for it since I put up his picture as my laptop's wallpaper... tile format...

Argh, I'm still waiting for Hosokawa to sing this on Kayo Concert!

Anyway, next we have 'Kita Sakaba'. This one was pretty much inevitable, being one of the best Enka songs of the 80's. I was a little torn as to whether I should put possibly Hosokawa's biggest hit (I think) or his debut single 'Kokoro Nokori' since both are equally as catchy. But as you can see, I went with the one I had a longer history with, that being 'Kita Sakaba'. Plus, its Mom's favourite Enka song and probably one of the handful of Enka songs she actually likes so it gets its time in the sun more often.

Dang, Hosokawa was a pretty dashing lad back in the day... and love how Maekawa nudged that female Enka singer (don't seem to be able to recognize her)!

I think this is the most recent song to grace this list, being released in the somewhat new millenium. I always enjoy a silly Yoshi song since they usually touch on simple things like Old men and Tofu, but the best one with the most listenable score has to be 'NDA!'. It's got Yoshi showing off his comedic side, and its Enka-reggae! The lyrics are pretty easy to decipher as well, basically about a young country bumpkin (I'm still pretty sure Yoshi's referring to himself) and his escapades in big city Tokyo. And you gotta love that NDA! face of his!. When I get bored of most songs, I tend to go for this fun little track.

We've got another one from another Enka power house. Itsuki has this likable gentle voice, even if when trying to sing intensely, just like in 'Yozora'. And just to be clear, I prefer the new version of it where this originally soft song is amped up with electric guitars,a quicker pace and a more energetic Itsuki. It's a good song to wake up my brain when it starts to go into hibernation mode during the mind-numbing Science classes!

'Otomi-San' is one of the oldest songs I know of, and out of the 5 songs on this list here, its the one I listen to the most. Being very jaunty, catchy and fun to listen to, Kasuga's biggest hit tends to get stuck in my head more often than I want it to... I suppose you could say that it's an ear worm. But I ain't complaining! I've just listened to it for the third time today as I'm writing this.


Well, that's that. I think I may do a similar list for Mood Kayo some other time. I reckon picking out the songs for that one would be a breeze.