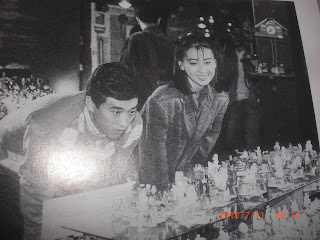 I had been wondering about how Miho Nakayama（中山美穂）was doing recently since the last news I did hear was that she had divorced her husband, writer-composer Hitonari Tsuji（辻仁成）after 12 years of marriage. Tsuji had also been married once before to actress Kaho Minami（南果歩）who would later marry actor Ken Watanabe（渡辺謙）...but enough of that matrimonial merry-go-round. Apparently at this point, Miporin is continuing to live in France with her son but appeared in her very first stage play earlier this year and was a performing guest last December at the annual "FNS Music Festival" for Fuji-TV, her first appearance on a music show in 18 years.

My recollection of the the 80s female aidoru is divided into the early 80s aidoru featuring ladies such as Seiko Matsuda（松田聖子）and Akina Nakamori（中森明菜）. But in the second half of the 1980s had the rise of a sassier and take-less-guff brand of aidoru; I always saw Shizuka Kudo（工藤静香）and Nakayama as the leaders of that "movement". And in fact, I read on J-Wiki that for that latter half of the decade, the aforementioned two aidoru along with Yoko Minamino（南野陽子）and Yui Asaka（浅香唯）were dubbed by the media as The Four Aidoru Queens.

In terms of music, my arrival in Gunma Prefecture came following the July 12th 1989 release of Miporin's 16th single, "Virgin Eyes" which had me hooked because of that dynamic melody composed by Anri（杏里）. And as a result, for some years, I kept my eyes and ears on the singer who seemed to be making that transition from regular aidoru to pop star because of "Virgin Eyes" without investigating too much about her earlier material.

Consequently, I didn't really know much about her preceding single which came out in February of that year, "ROSÉCOLOR", aside from the title all in caps. A bit of a pity since it is a nice little Latin-infused ballad which was written by Chinfa Kan（康珍化）and composed by Cindy.

One of the reasons that Nakayama and Kudo have stood out to me despite that label of The Four Aidoru Queens is that I always had that comparison between the two singers. Kudo was the aidoru with the oomph factor in her songs and dancing while Nakayama struck me as being at her best with the balladry, vocally speaking. But even in the above performance on "The Best 10", there were some of the characteristic off-notes that I've often associated her with when it came to her uptempo stuff. Still, it is a soothing tune that I wished I could have gotten to know earlier. Well as they say, better late than never.

"ROSÉCOLOR" was the 5th in a string of 5 No. 1 singles that Miporin had between 1987 and 1989 (she would have three more No. 1s after that). It would finish the year as the 27th-ranked single. The ballad would also be used in a Shiseido commercial.


I also came across a video featuring PSY-S' Chaka singing a more straight-ahead pop rendition of "ROSÉCOLOR"; no idea whether this was ever made into a track for one of her own solo albums or as part of some compilation project. The performance stops midway to introduce the cover (with some of that Latin flavour back) by composer Cindy herself for her 1991 album "Don't Be Afraid". She would cover it again in 1997 for her final album "Surprise". At the risk of offending fans of Miho Nakayama, I think Chaka and Cindy delivered smoother versions. The one other reason I put this article up was in a tribute to Cindy herself that I started with my first article on her.
Posted by J-Canuck at 5:09 PM