About a few weeks before I was to leave for the JET Programme on my very first post-university job, I received the shocking news that one of my favourite aidoru, Akina Nakamori（中森明菜）, had attempted suicide on July 11 1989, just a couple of days before her 24th birthday. Of course, this was back in the pre-Internet days so I couldn't exactly rush to a computer terminal and find out lickety-split about what her status was. Also knowing that a few years previously aidoru Yukiko Okada（岡田有希子）had killed herself didn't help my fears about Akina. As the days toward my departure for Japan drew near, I was able to piece together that the attempt had occurred supposedly because her long-time boyfriend, aidoru Masahiko Kondo（近藤真彦）, had dumped her and that Akina had made the attempt in his apartment.


Although I was relieved that Akina would recover from her injuries, the fact that she had actually tried to kill herself and that she would take a year off did sadden me since I was such a big fan of hers. When I finally got to Japan at the end of July, I had known that her 14th album, "Cruise" was coming out. It had come out just a few days before my arrival and I was in Tokyo for 5 days of orientation before being shipped out to the mountains of Gunma Prefecture, so during the little free time I had I was able to find a major CD shop in Shinjuku to search for the album.


It would turn out that I didn't need to look too hard. As soon as I entered the very air-conditioned store, "Close Your Eyes", one of the tracks, was playing over the store speakers and the album was featured very prominently on the wall. I had bought her albums during the late 80s, and frankly found them not too listenable since she seemed to get a bit too avant-garde or hard rock for me. But I was struck by "Close Your Eyes", a very atmospheric piece with a Mediterranean feel; her voice sounded different, too. The huskiness that had been her trademark since her mid-80s peak was still there but transformed into something more delicate. This was an Akina who sang as if she were a seen-it-all, heard-it-all, felt-it-all diva in resignation. The lyrics, by the way, were provided by Masako Arikawa（有川正沙子）, who had written many of Akira Terao's（寺尾聡）tunes on his hit album, "Reflections" (already profiled) in 1981.The music was composed by Brazilian artist Osny Melo, who has written songs for a number of Japanese singers like Hiromi Go（郷ひろみ）and Akiko Kobayashi（小林明子）.

When I bought "Cruise", the significance of the situation hadn't been lost on me. I did feel somewhat eerie about buying an album just a few weeks after the artist had tried to leave this mortal coil.

Because of the attempted suicide, "Cruise" took on a more poignant meaning for me. I found that there were no uptempo songs on the album at all, and tracks were given titles such as "URAGIRI"(Betrayal) and "Liar". How much of her life was flowing into these songs? Were her collaborators aware of what was going on in her life? The songs seemed to be linked by a theme of ennui and sadness. "Sayonara ja Owaranai"（さよならじゃ終わらない....It Won't End With Goodbye）is one of the relatively more mid-tempo tracks in which she finds it difficult to leave her beau. It was written by Goro Matsui (松井五郎） and composed by Anzen Chitai（安全地帯）vocal Koji Tamaki（玉置浩二）. What is remarkable about some of her appearances for this song and "Close Your Eyes" is how fragile Akina looks in them. She sang the song as if she were keeping up a brave face under difficult circumstances.


"Liar" was the only track that had been a single release back in April. Written by Mitsuko Shiramine（白峰美津子）and composed by Kazuya Izumi（和泉一弥）, this was a song of lost love. Not quite sure if it had been meant for Matchy. The single hit No. 1 from the get-go and ended up as the 28th-ranked song of the year. "Cruise"itself also reached the No. 1 mark and became the 31st-ranked album of 1989.

As much as the Yellow Magic Orchestra's debut album had become my very first J-Pop purchase on cassette tape almost 10 years previously, "Cruise"was my very first CD purchase of a J-Pop singer. Unlike some of her past albums, I bought this one without feeling any trepidation at all. 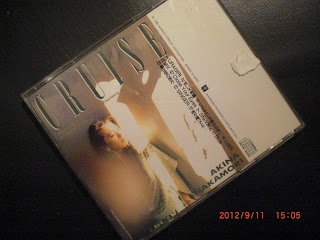