Thanks to bode1967 from Brazil for this entry. bode was very kind to leave a comment about impressions of "Michi" on my entry for Chisato Moritaka's "Benkyo no Uta"（勉強の歌）.


Chisato Moritaka（森高千里） I discovered during my time on the JET Programme between 1989 and 1991. I'd seen her performing on TV in that spangly and short miniskirt and all that long hair....she definitely left quite the impression. And a number of her music videos certainly maximized that fashion statement.

However, I was struck by this video for the song "Michi"(The Road), which was her 9th single released in January 1990. It just showed her face in close-up for the entire video as she sang her own lyrics of loneliness walking the titular road as her significant other is no longer by her side. She was around 20 when she wrote the song with composer Shinji Yasuda（安田信二）, but I've always thought that this was more of a song of high school memories than of college-era wistfulness for some reason. And the refrain is the part of the song I always remember: "Spring and Summer and Autumn and Winter, roads and stones and garbage and empty cans, the moon and the stars and the clouds and the night sky, I will never forget the memories of you."

And although the lyrics hint at walking down the street, I've always felt that "Michi"was one of those tunes that worked well while taking that drive on a regional road outside of the big city. I also enjoyed that guitar near the end which kinda reminded me of something by The Traveling Wilburys.

As with many songs, there was a commercial tie-up with "Michi". It was the jingle for Glico's Pocky.

Dang! Nearly a quarter of a century later, and she looks great! Forgive me for not providing translation (busy with translation work right now) but I came across this video which was uploaded to YouTube just a few months ago. It's basically a visual liner note about the song by none other than Moritaka herself. If any of you viewers can understand Japanese or know someone who does...enjoy!

The flip side to the introspective "Michi"was "Seishun"(Youth), which talks about a young teen going through the usual stuff that teens go through such as that first part-time job (probably at a convenience store), that first driver's license, that first PC (remember, cellphones that could slip into a pocket were still years down the road). Lyrics were also provided by Moritaka here with music by Hideo Saito（斉藤英夫）. The arrangements seemed to have been done to reflect the frenetic pace of the average adolescent as he/she alternately speeds and stumbles through those salad days. I can imagine the teenage Moritaka racing towards school to this song. But instead here she is above in that famed costume of hers.


Once again, we go ahead in time to see the youngish Moritaka perform "Seishun" unironically in front of an apartment complex(!) Why? I've got no idea....I wouldn't think she, her actor husband and the rest of her family would really live in a New Town.

Ah, by the way, the CD single reached as high as No. 5 on the Oricon charts. However, the two songs came on different albums. "Michi" came out on her Best album, "Moritakaland"（森高ランド）in December 1989 while "Seishun"was part of another Best album, "The Moritaka"（ザ・森高）, released in July 1991. 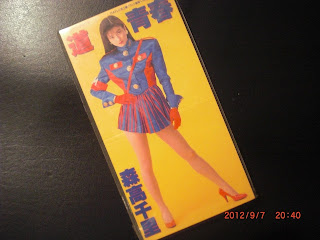