I first came across this band when I was leafing through one of my Eye-Ai magazines back in the early 90s, and arrived at the page for what J-Pop was available via mail order. This very album, "KM 93.11"was being advertised and frankly I don't remember much about what I read about it, but all I do remember is that the band was somewhat eclectic in sound. I was intrigued but there were a lot of other choices I had ahead of these guys, so I never took that chance on them.

Leap forward almost 20 years. I was rustling through the outside bins of old and used CDs in front of (the late) Recomints 1 in Nakano Broadway, and I found an old copy of "KM 93.11" along with a few other CDs by dip in the pool. Being just 100 yen, my investment risk was far less than it was back in 1992, so I decided to pick this up for perusal, and later on, I would also buy an earlier album, "Aurorae"(1991). Glad to say I made quite the sonic profit.

There is relatively little information about dip in the pool, but there is the Wikipedia entry, they have a Facebook page, and there is a 7-year-old page written by Nicholas D. Kent that gives his insights on the duo's discography. For the record, dip in the pool (not sure if they got the name from the short story by Roald Dahl) is model/actress/singer Miyako Koda（甲田益也子） and keyboardist/songwriter Tatsuji Kimura（木村達司）.

The two apparently started things off in 1983 and released their first album, "Dip in the Pool" in 1986 (in the UK, it's titled "Silence"). As Kent mentioned on his page, the duo performed a brand of "...an extremely refined kind of pop." From what little I have heard via this album, "Aurorae" and any videos on YouTube, I could say that their music is something like dream pop; Miki Nakatani's（中谷美紀） "Cure" comes to mind. And perhaps dip in the pool is more ethereal than PSY-S, perhaps somewhere around Mimori Yusa（遊佐未森）.

As for "KM 93.11", their 6th album released in 1993, it's a bit of a concept album in that Koda weaves in and out and between the songs as a somewhat spacey DJ for the fictional radio station that the title represents. I'm guessing that compared to their earlier material, the songs here are a bit more on the conventionally pop side of things, ranging out into the world's music, perhaps in keeping with the radio theme. The remarkable thing that stands out for me is Koda's voice. I've often talked about some female kayo kyoku voices having that "whiskey-and-cigarettes"sound. Well, Koda's vocals and her DJ voice strike me as being warm honey from a particularly rare flower. I had never heard a voice like hers before. Not to say that she sounds British, but her delivery seems rather plummy.


The first song is the techno "A Breath From The Queen of Snow".

The next song, "Sebone no Youna Kumo"（背骨のような雲...Clouds Like A Spine) is a languid relaxing song with a hint of bossa nova while the following tune is the jaunty "Niji no Shirushi"（虹のしるし....Mark of a Rainbow）. Compared to the earlier "Aurorae", dip in the pool were more willing to stretch their fingers into the other genres of pop music.


I also enjoy the first music track, the jazzy "Diana".

It took me a couple of decades to finally realize the cool sounds of dip in the pool, but now that I have, I'm gonna continue on the hunt for not only their increasingly rare works but also for some of the other under-the-radar singers out there. If there are any other dip in the pool fans out there, give me a shout and feel free to provide any insights. 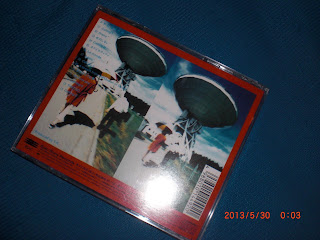 Email ThisBlogThis!Share to TwitterShare to FacebookShare to Pinterest
Labels: 1993, Album, dip in the pool, Pop, Techno