Yup, that will be the image I will always have of Ringo. Not as the scowling junior high school student or as the saucy yukata-garbed girl or even as the nude singer making love to her guitar, but as THAT nurse.

"Honno"(Instinct) is Ringo Shiina's（椎名林檎） most successful song to date. Her 4th single was released in October 1999, and it starts off with this foreboding buzz before the crashing of drums and Ringo's vocoder voice, launching like a chainsaw. What I have loved about "Honno" is the way she brings her vocals down to a more sensual, velvety level while still trilling those thrilling R's, and that twangy guitar before she goes into the refrain.

But of course, the talk of the town was the cover of the single and the music video (too bad it's nowhere to be found online). I think that cover of her punching through the candy glass has become somewhat of an icon, and I did see the video in pieces before catching it in its entirety some weeks after the single's release. Ringo probably made the whole lot of cosplayers ecstatic in one fell swoop in that nurse outfit, the terrifying heels and the blood-red lipstick. As for that racy scene of her having her way with a female patient, that patient happened to be her buddy who was attending university at the time. After seeing that video, I judged that Shiina was someone who would be making headlines musically and visually from now on.


Just for a bit of contrast, here is the jazz version of "Honno". 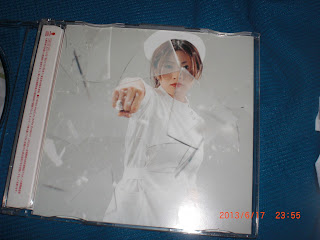