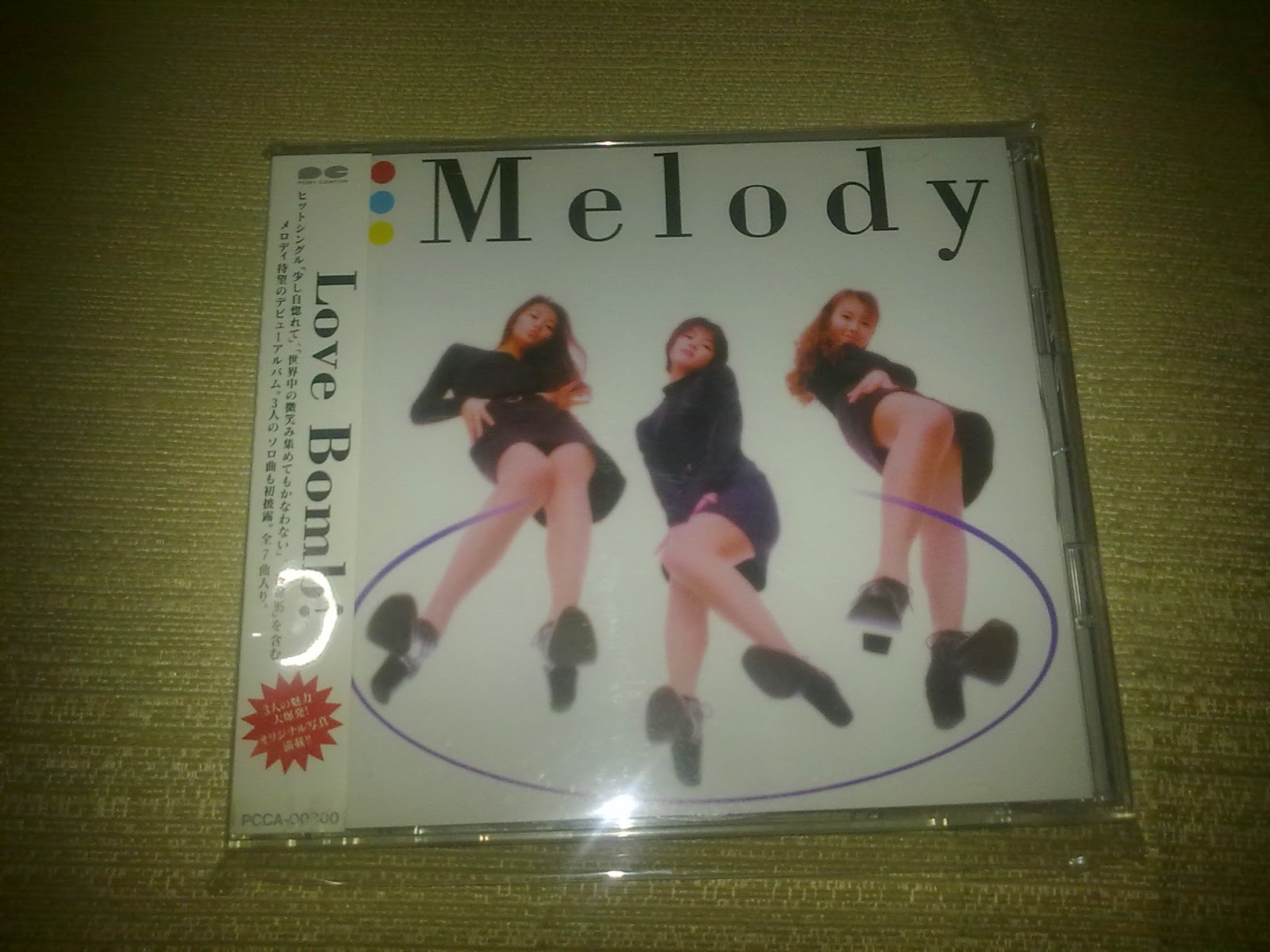 It’s weird that after two years writing for Kayo Kyoku Plus I never mentioned one of my favourite aidoru groups since 2011. I’m talking about Melody, which was comprised of Yukimi Tanaka (田中有紀美), Mayu Mochizuki (望月まゆ) and Minami Wakasugi (若杉南).

Melody had a small career, from 1993 to 1997. They were not a very popular group, which is understandable as they were active during the mid-90s, a time when aidoru acts were not among the most appreciated thing. I remember seeing them for the first time in a TV show called “Idol on Stage” (アイドルオンステージ), which, just like Melody, came to life in 1993 and ended in 1997.

My favourite songs from Melody are all included in their debut album, “Love Bomb!”, which was released in September 1995. Clocking around thirty minutes, it’s not a very big album, but all the songs are quite interesting, so its small playtime is not exactly a bad thing here. Also, although small, I’m not covering all of the songs here, but just my favourite ones. So, let’s start.

“Love Bomb!” opens with “Unmei ’95” (運命'95), which was not only their most recently single at the time, but also the best of the three singles included in the album. The noisy hammered synths coupled with aidoru pop sensibility and the then-popular Eurodance sound was a great combination that resulted in this nice album opener. For me, the arrangement is the winner here and the bridge echoes this feeling presenting more of the hammered synths, but this time with a charming and distorted “thin-sounding” synth line keeping up with it.

Lyrics for Unmei ’95 were written by Kaori Morikawa (森若香織), while music was composed by Ken’ichi Kurosawa (黒沢健一). As for the arrangement, Hiroshi Shinkawa (新川博) was the responsible.

“Love Bomb!” was divided between four songs recorded by the three girls as a group and three solo songs, one for each girl. So, the first one to show up is “Knock Me ~Anata wo Koetai~” (Knock Me ~あなたを越えたい~) by Mayu Mochizuki, which was the first song I listened from the group back in 2011 while watching a performance from the aforementioned “Idol on Stage” show.

When I first heard "Knock Me ~Anata wo Koetai~", it was surely love at first listen. I spent almost four years listening only to the live versions on YouTube without having never listened to the original studio recording (I finally bought the album last month, so this problem is solved). It didn’t stop it from being one of my favourite songs from the last four years.

“Knock Me ~Anata wo Koetai~” starts in a very epic way with various layers of synth sounds. Unfortunately, the audio is not very good in this live recording, so I will just point out how I love the combination of the mysterious “strings” sound with the thick Euro synths that are played at the beginning. After that, Mayu enters and this energetic song starts for real. So, my favourite parts, besides the introduction, are the catchy chorus (Kiss, Kiss, Kiss Me In My Heart... Knock, Knock, Knock Me In My Mind...) and the amazing instrumental breakdown which fuses the thick Euro synths with a random guitar solo. In the end, this is my favourite song from the album, and it really pumps me up.

Lyrics for “Knock Me ~Anata wo Koetai~” were written by Mayumi Kurobe (黒部真弓), while music was composed by Masaya Ozeki (尾関昌也). As for the arrangement, Masaya Suzuki (鈴木雅也) was the responsible.

My next highlights from this album are the other two solo songs, so, after “Knock Me ~Anata wo Koetai”, the second one to appear is Yukimi Tanaka’s “Nee, Darling!” (ねぇ、ダーリン!).

“Nee, Darling!” is the quintessential cute aidoru pop song with catchy chorus and overall fluffly feel. Even the main synth line is pure saccharine, but I never get tired of it. Not much to say about this one, so I only ask you to dive into this little pink world offered by “Nee, Darling!”.

Oh, I almost forgot to point out how cute Yukimi-chan is while whispering parts of the chorus and giggling to the listener near the end (sorry, the giggling can only be found in the original studio recording). It can’t be more aidoru than that!

Lyrics for “Nee, Darling!” were written by Shigeru Amano (天野滋), while music was composed by Tomomi Sakata (阪田友美). As for the arrangement, Masaya Suzuki was the responsible.

Our last song is Minami Wakasugi’s “Your Song”, which is a traditional Latin song. Generally speaking, I’m not always attracted by a Latin song without some twists, but I liked the overall romantic feel portrayed by Minami while singing it. Also, I fell in love with the moment, around 1:12 and 1:13, when her voice struggles to match one note in the middle of the chorus (right when she pronounces miwataseba [見渡せば]). It also happens during the second chorus, so you can really tell that this note was somewhat a problem for her... well, it's fun to find flaws in aidoru performances, do don't judge me like that.

Lyrics for “Your Song” were written by Mayumi Kurobe, while music was composed by Tomomi Sakata. As for the arrangement, Masaya Suzuki was the responsible.

Well, that’s it for Melody’s “Love Bomb!”. It’s surely an addictive and fun album for someone who likes aidoru pop and Eurodance from the 90s. 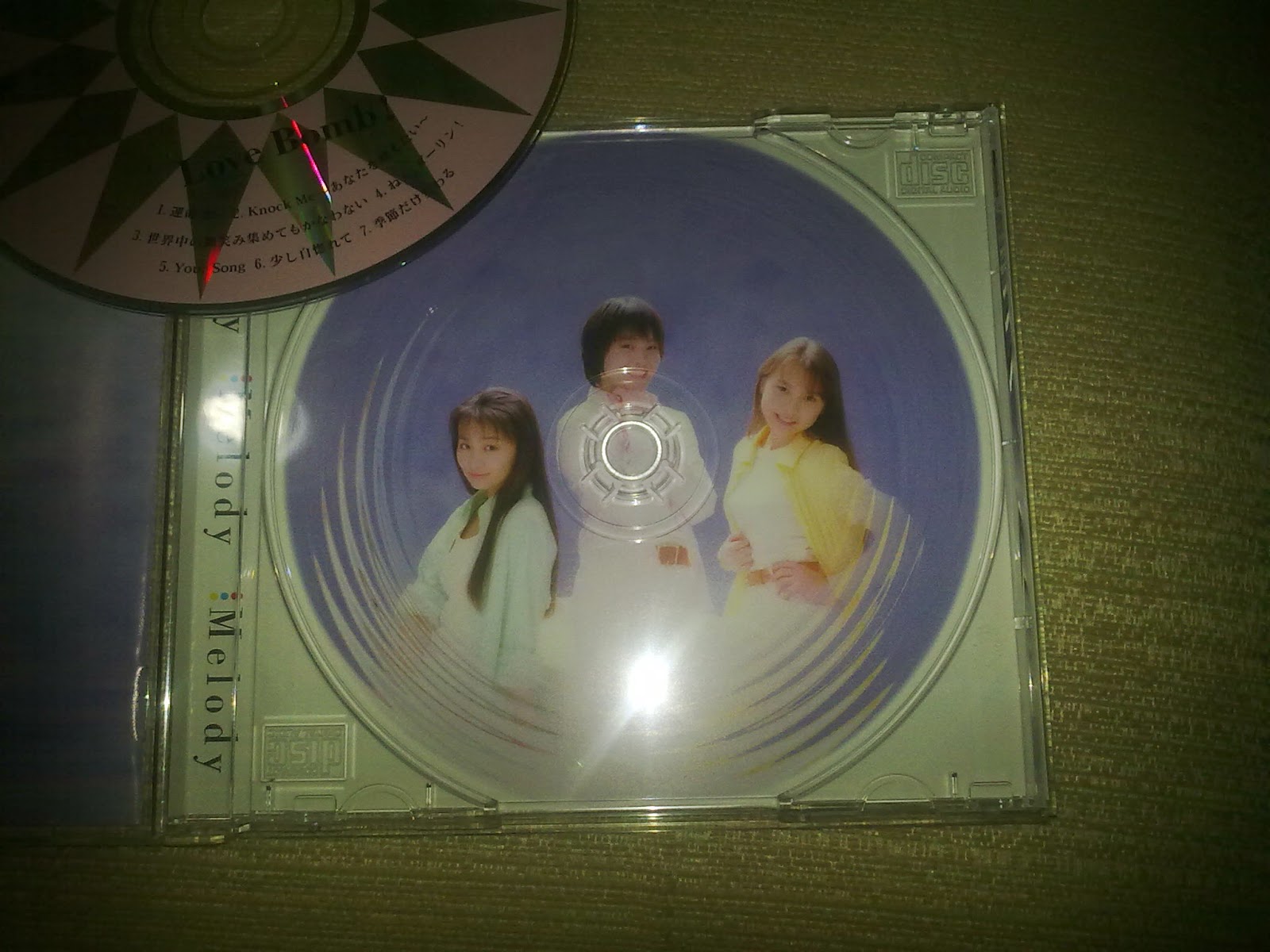