Kakko -- We Shoud Be Dancing


I warn you right now... this is pure Stock Aitken Waterman (SAW) magic!!!

First of all, Kakko is a Japanese actress and tarento that started her career as a singer for Stock, Aitken and Waterman back in 1990. Apparently, her name was Kakuko Yamagata (山形香公子), but she also worked under the pseudonym of Anju Suzuki (鈴木杏樹). Yeah, the girl surely changed her name a lot.

“We Should Ba Dancing” was released in February 1990 as Kakko’s debut single under SAW’s wings. As the Hit Factory’s hits were really big in Japan, it’s a great coincidence that a Japanese tarento happened to work directly with the powerful production trio in UK.

About the song, it’s that type of pop tune that, for being so bad, ends sounding good. Well, maybe good isn’t the right word, but it’s surely a strong piece of kitsch pop music from the late 80s/early 90s that probably feels confortable in the guilty pleasure category.

When “We Should Be Dancing” came out, SAW, although still at their peak, was already starting to decline. Their distinctive and happy Disco sound, a mixture of Synthpop and Italo Disco with newly added House elements, still worked very nicely in their favor, but acts such as Kakko and The Reynolds Girls, for example, didn’t reach the success of top artists like Kylie Minogue, Rick Astley, Sinitta, Bananarama and Jason Donovan, to name a few.

In the end, though, “We Should Be Dancing” offers what SAW did best... a catchy chorus and a lively arrangement full of dated synths that people love to hate, but, like Tina Charles sang in the 70s, “I love to love”.

And tell me... how not love the video? As if the song wasn’t kitsch enough, we also have to deal with the bubbly video of “We Should Be Dancing” and a cute Kakko dressed with a gorgeous red bodycon (ボディコン) dress, similar to the dresses used by OL and young disco girls in Japan at the time.

Here’s a young and cute Ryoko Shinohara (篠原涼子), still at Tokyo Performance Doll (東京パフォーマンスドール), singing a Japanese version of “We Should Be Dancing”. What a rarity!

“We Should Be Dancing” was a commercial failure, reaching number 101 in the UK charts. Kakko would release one more single, called “What Kind of Fool”, before quitting her music career and returning to Japan under the aforementioned Anju Suzuki pseudonym.

Finally, there’s a legend about a full lenght Kakko album that was recorded back then, but have never seen the light. Rumours point out that it might get released someday, but, until now, nothing happened yet. Personally, I’d love to hear this underground pop gem... 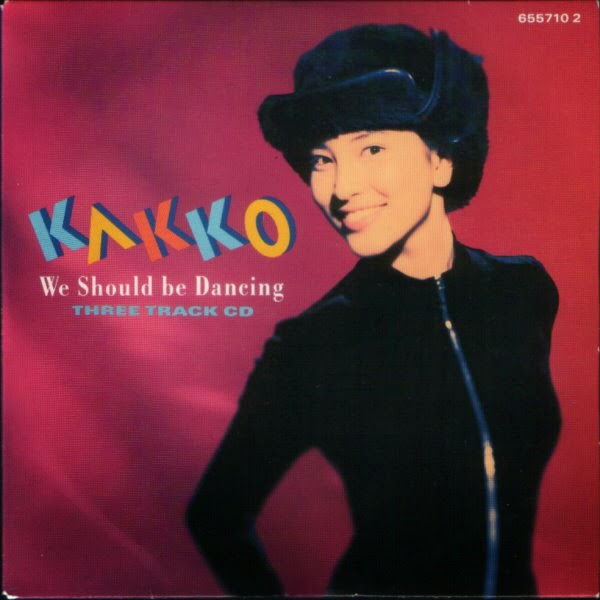