To commemorate Hibari Misora's (美空ひばり) passing 26 years ago, the "Kayo Concert" episode a couple of days ago had just featured some of this veteran singer's songs, and I enjoyed it a lot more than last year's one (my introduction to the show). I suppose it's because most of the guests on board were recognizable by yours truly, like Hiroshi Itsuki (五木ひろし), Aki Yashiro (八代亜紀), Yoshimi Tendo (天童よしみ), etc. and I've already been exposed to the different sorts of enka/kayokyoku that Madam Misora had been known to cover in the past year. But I have to admit, there are still some of her hits that I have yet to be agreeable with, most notably, the heartbreaking and extremely melancholic "Kanashii Sake" (悲しい酒).

Anyway, Itsuki and Yashiro started the ball rolling with one of  Misora's tunes from later in her career in 1986, "Ai San San", and although Yashiro nailed the sadness in "Kanashii Sake" near the end of the show, I felt that her vocal delivery was a little out of place when she sang half of this before passing the baton on to Itsuki. And Mom, who's a pretty big fan of Misora by now (I'm genuinely surprised), was less than happy to hear this rendition. Tendo or Natsuko Godai (伍代夏子) would've been a better choice, in my opinion.

Now about the original, "Ai San San" is a really delicate song especially in terms of its music since most of it just has the acoustic guitar tinkling away, and the strings at the later part add elegance to it. I guess you could say that its kind of like Madam Misora, who seems to be singing each word with such deliberation in a voice bigger than herself. And it just reminds me of rainy days where the rain has slowed to a drizzle, and the sun rays are slowly streaming through the dark clouds. This, including its lyrics, was brought to you by singer-songwriter, Kei Ogura (小椋佳). I don't really understand "Ai San San" lyrics-wise, but so far, I'm able to fully agree with these lines:

"Ai San San" did fairly alright on the charts, peaking at 69th place, and there have been quite a number of covers over the years. It was sung twice on the Kohaku, but not by Misora though. It was first sung by fellow Sannin Musume (三人娘... female version of Sannin no Kai) member, Izumi Yukimura (雪村いづみ) on the 40th Kohaku in 1989 in honor of the Queen of Kayokyoku. And then it was sung again many years later in 2007 during the 58th edition of the year end competition by Ogura with "Misora" - video version of her. 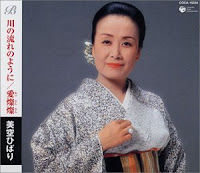 amazon.co.jp
Posted by Noelle Tham at 9:31 AM