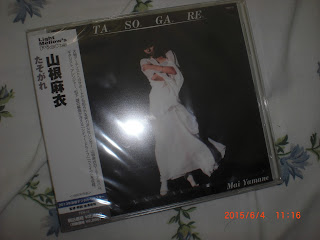 A little over a couple of years ago, I wrote my first article on Mai Yamane（山根麻衣）. I think she's probably better known for her work with various anime projects including "Cowboy Be-Bop" but I first found out about her through the pages of "Japanese City Pop". Interested enough through the write-ups there and the one song that I did have of her in the "Good Times Diva" series, the cover of Eric Carmen's "Foolin' Myself", I started searching for any of her early albums. But at the time, even visiting my resident expert store in rare kayo kyoku, Tacto, only found a BEST compilation which cost a whopping 7800 yen! Unfortunately, economic sanity had to trump over cultural curiosity and I figured that was it for finding anything of her old originals although I remained hopeful...something that I've mentioned in the first two articles for Yamane.


Well, the situation has happily changed now in June 2015. The album that I thought was one of the rarest of the rare was actually selling at Tower Records, and so without hesitation, I pushed the buttons to get Yamane's first album, "Tasogare"（たそがれ...Sunset）from May 1980, and listened to it last night when it arrived by EMS on Friday morning. Very surprising and delightful. For one thing, it isn't purely a City Pop album, although the title track and "City Drive" along with at least one other tune provided by City Pop crooner Yasuhiro Abe（安部恭弘）are very much in that vein. She deftly handled some rock and some country-folk tracks in there, and her voice belied someone who hadn't even reached 22 years of age at the time. I would be more than happy to put her up there with divas such as Minako Yoshida（吉田美奈子）and Junko Ohashi（大橋純子）, and according to the chatter on one of the tracks, "Yore Yore Boy"（よれよれ・ボーイ）, she certainly sounded quite conversant in English. 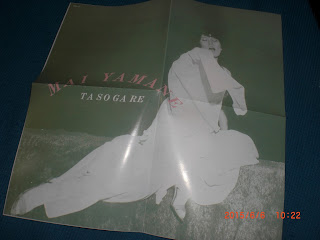 As for "City Drive", Chinfa Kan（康珍化）handled the lyrics while Fujimal Yoshino（芳野藤丸）from the band SHOGUN took care of the oh-so-City Poppy melody. True to the title of the album, this definitely has the feel of a drive down the Bayside Highway at that certain time of the day when the weather was just excellent, and again that voice of hers just sparkles like those keyboards.

It's too bad that there isn't a whole lot of her material online from those early days, but I'm happy enough as it is now that I've got "Tasogare" as part of the collection.