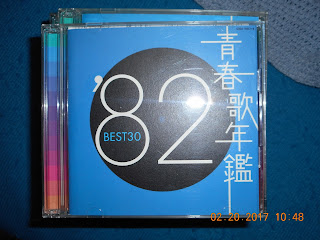 Can't quite believe that I gave that listing for the 1981 Kohaku Utagassen all the way back in 2012, but then again, I was probably filled with a lot of enthusiasm for telling about one of the sources responsible for me getting into popular Japanese music. Therefore, I'm now bringing this article in the form of its sequel, the listing for the 1982 Kohaku Utagassen（第33回NHK紅白歌合戦）.


If I'm not mistaken, this was probably televised in Toronto in January 1983 instead of New Year's Eve 1982...video technology and legal red tape as it was back then. That was also the case for the 1981 Kohaku. There were some distinct highlights that I still have in my brain from the 33rd edition such as Hiromi Iwasaki's（岩崎宏美）rendition of "Madonna Tachi no Lullaby"（聖母たちのララバイ）as above, Seiko Matsuda's（松田聖子）pretty number and Hiromi Go's（郷ひろみ）cover of Bertie Higgins' "Casablanca". And Aming's（あみん）"Matsu wa"（待つわ）still goes into my Top 5 Adorably Cute moments from the entire history of the special.


Another highlight was watching Southern All Stars（サザンオールスターズ）performing "Chako no Kaigan Monogatari"（チャコの海岸物語）. I had never heard of Keisuke Kuwata（桑田佳祐）and his band before and their out-of-the-ordinary performance on the Shibuya stage had me wondering if these guys were seriously nuts (I think Kuwata was trolling NHK the entire time). My parents were even more unimpressed. However, things are now cool between SAS and me although that is most likely not the case between them and NHK.

(Sorry but the video has been taken down.)

The other thing I remember from this Kohaku was that the younger singers did a Beatles medley in the early part of show. Quite good but still not quite as slick as their tribute to Quincy Jones' "Ai no Corrida"（愛のコリーダ）in a similar segment on the 1981 broadcast.


Being the immature nerd I was back then, I think I rather giggled at the intro of Mina Aoe's（青江三奈）magnum opus. However, the above video is from the 1968 edition of the show.
Posted by J-Canuck at 2:38 PM