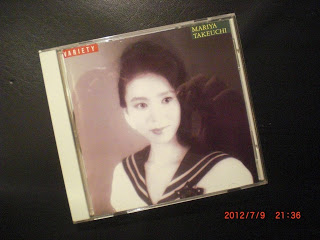 Back 5 years ago, one of my first album-based articles was "Variety", one of Mariya Takeuchi's（竹内まりや）classic releases in 1984. I provided four of the tracks from that album so I've decided to talk about a few more.

The one most recognizable to me from this batch is "Merseybeat de Utawasete"（マージービートで唄わせて...Let Me Sing In Merseybeat）. I had never heard of the genre name before coming across this Mariya number, but I believe that I did hear some of its examples when I was a kid since I did know of some of the representative bands such as Gerry And The Pacemakers, Herman's Hermits and some outfit called The Beatles.

As was the case with all of the tracks in "Variety", "Merseybeat" was written and composed by Takeuchi. Although I knew of her tributes to American pop music of a certain age in her earlier material, I think this was the first time that she went across the Atlantic, as it were, to land in the music of Liverpool and the various cities by the Mersey River in England. I would really like to know the stuff she listened to as a high school student in Japan and in Illinois.

Well, it's back to America for "One Night Stand", a down-home country ballad that Takeuchi seems to have a talent for. Listening to it, it makes me wonder why she was never invited to "Hee Haw". As the title indicates, Mariya is relating the ultimate loneliness of not having a settled romantic relationship, instead just jumping from town to town looking for love. There's only his Stratocaster and his playing buddies to heal his heart temporarily.

There is something contemporary yet 1960s about "Futari wa Steady" (ふたりはステディ...They're Going Steady), a cheerful and jaunty track with her husband Tatsuro Yamashita（山下達郎）providing backing vocals, Ryuichi Sakamoto（坂本龍一）on synthesizer, and Ernie Watts blowing his sax. For me, this is the quintessential early Mariya tune: young and happy uncomplicated love.


The final track for tonight and the final track on "Variety" itself is "Shetland ni Hou wo Uzumete"（シェットランドに頬をうずめて）. I wasn't quite sure how to translate the title since it literally comes out as "Burying My Cheeks in The Shetland". I had assumed that it had something to do with that dog on the back cover of "Variety", but on investigating further, I realized that it wasn't a Shetland Sheepdog.

Looking at the lyrics, I found out that the song could be about the couple from "Futari wa Steady", a number of decades later. Having gone through the usual ups and downs of marriage, the retired husband and wife are living by themselves in a more remote area during the winter while the latter is weaving what seems to be a sweater from Shetland Sheep, and she wants to rub her cheeks on the wool. As Takeuchi sings, she's very content to be living out in the countryside now with the kids on their own.

Still "Shetland" has that urban contemporary feeling to it despite the rural setting. It's quite the mellow finish to a fine album. Three more tracks that I'll have to wrap up, though, before putting the final close to the "Variety" file. 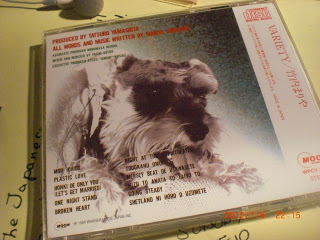 Probably not a Shetland.
Posted by J-Canuck at 8:22 PM