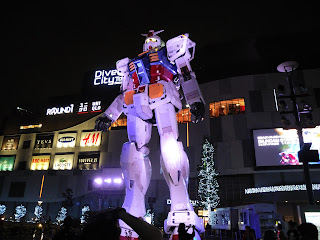 Happy Simcoe Day! The above is a photo of the welcoming Gundam in Odaiba, Tokyo. The shot is quite dated now since the RX-78-2 model has now been dismantled, but no worries since the Unicorn Gundam is being built to replace the older version. I'm sure the fans are greatly anticipating its arrival. 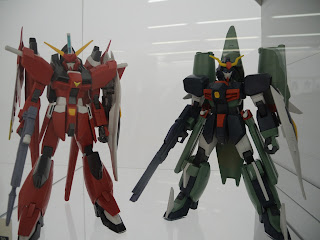 One of the questions that I'd had about Gundam was how the producers ever came up with the name. I mean, Japanese mecha shows always had that weird naming process for their stars such as Grandizer, Xabungle and SPT Layzner (that last one I like to pronounce as "Spit Layzner" since it does sound like a great nickname for a frothy-mouthed WWII flying ace). But what was it about Gundam?


Well, my anime buddy yesterday gave his theory that the name Gundam came from a fusion of "gun", which would be obvious considering the nature of the show, and "dam" after the Mandom manufacturer of men's cosmetic products. Since Charles Bronson starred in a number of its 1970s TV ads, the "dam" had that cachet of coolness and masculinity. So, can you imagine that one of the original Magnificent Seven helped inspire one of the most beloved anime franchises in Japanese history?


It would make for an incredible story especially since "The Magnificent Seven" itself was based upon Kurosawa's "The Seven Samurai". However, my buddy is probably wrong. According to Wikipedia, the original creator and director behind "Kido Senshi Gundam"（機動戦士ガンダム...Mobile Suit Gundam）, Yoshiyuki Tomino（富野由悠季）, along with the Hajime Yatate（矢立肇）team at Sunrise Inc. the animation studio, did base the name on "gun" but the last part of anime's most famous portmanteau was the "dom" from "freedom", and there were apparently many references to the word in the early productions. Tomino then decided to change that one vowel at the end to create "dam" so that the gun holding back the enemy would be like a dam holding back water. Well, gun-damn!


But this is a music blog, after all. So, yesterday, during anison hour, my friend played the opening and ending themes for the very first entry in the "Gundam" franchise in 1979. The opening theme is "Tobe! Gundam" (Fly! Gundam) and the ending theme is "Eien ni Amuro" (Eternal Amuro). The theme songs followed that pattern of other anime openings and endings from that time period with a heroic and brassy opener followed by a gentler ballad reminiscent of the Marlboro Man setting up camp after a long day of being manly. Both songs were performed by the late actor and singer Kou Ikeda（池田鴻）and created by Takeo Watanabe（渡辺岳夫 ）and Tomino himself under his lyricist name of Rin Iogi（井荻麟）.

I realize that it was back in the late 1970s but I was still slightly surprised by the jaunty disco nature of "Tobe! Gundam". I think I had been expecting something more military although the arrangement is definitely heroic. And the theme did catch fire among fans since it became the No. 5-ranked anison for 1980 according to Oricon's anime and children's song chart.


The B-side for Ikeda's single was the ending theme "Eien ni Amuro" which is a pretty curious number because of the arrangement. It starts off almost like a lullaby putting Amuro to sleep (and boy, did the lad need sleep with all that angst infesting him) before the music picks up speed. Although it still follows that pattern of early 1980s ballad-like anison ending themes, the melody kinda strikes me as being as modular as a typical Gundam mobile suit with a certain passage of music here and another somewhat different passage there. And it's all packed in just a little over 3 minutes.


As crazy as it sounds, I could imagine Bradley Cooper playing the live-action Amuro, but he's very busy right now in a certain other Hollywood sci-fi franchise. 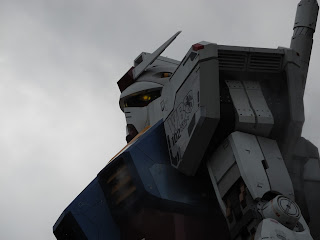