Writing articles based on personal viewing experiences makes me feel like I'm a lucky girl who gets to see Japanese singers every week. I wish that was the case, but I don't have the time nor the money to follow that lifestyle.

Still, I try to grasp every chance, and I had the tickets for this event months before I decided on my other trip to UK. I am talking about Iberanime, the biggest anime and Japanese culture event in Portugal (the second biggest "geek" convention, after Comic-Con, which is more recent).

It is an event I attended when younger, in my first years of anime-loving, but stopped going as soon as it got too expensive for what it offered. Since then, other events started decreasing in size or disappearing, as this one got more relevant and started inviting some bigger guests. I went this year to see Riho Iida (飯田里穂). 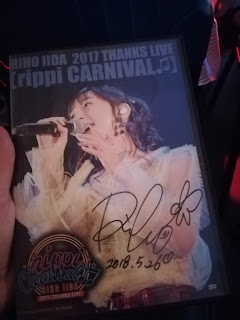 Riho Iida (affectionately known as Rippi) is a former child actress who is now a voice actress and got her breakthrough through Love Live! (ラブライブ!), the anime and mobile game which popularized the "2D/seiyuu idol" concept. This means the characters are idols both in animation and in real life.

I actually got the ticket as soon as I found out one of the voice actresses of Love Live was going, since it's a media I enjoy, both anime, mobile game (which I don't play anymore, though) and, of course, the music. Most tunes are essentially typical idol anisongs but there are some gems. Rippi's character in particular is not one of my favorites but I like her, mostly because of her singing voice, which is very good, including during live performances. 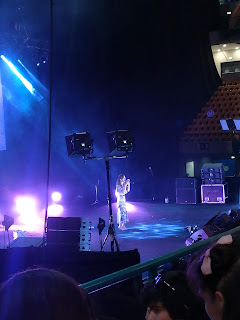 During the two days of the event, I saw Iida three times. The first was at a meet and greet, where I got the signed DVD shown above. It was actually the first time I talked in Japanese to someone (besides that sole "otsukare" I got to say to Maison book girl), and all those years of anime and variety binge-watching paid off, lol. (I still want to attend a proper course, though.)

The other two times were two concerts. The first was a smaller, demo concert and the second was the full version. The setlists were mainly composed of her solo career repertoire, finishing with one Love Live song, different for each day. It was actually my first time listening to anything from her individual career, but I was pleasantly surprised. I got the feeling that her songs are all pretty catchy and nice to hear.

KISS! KISS! KISS! was the song that got stuck in my head because she sang it one time in each concert plus an encore. It is the main song from her first solo single, released in 2015, in the peak of the Love Live boom. Both lyrics, composition and arrangement are credited to Kenichi Maeyamada, better known as Hyadain (ヒャダイン). That basically explains why it's such a fun and catchy song, and everyone was singing along the chorus.

Rippi is a very sweet person and everyone welcomed her very warmly. In the audience, you could notoriously see Love Live cosplayers and dedicated fans carrying penlights. One person offered her a bouquet during the meet and greet. We don't have this kind of artists coming here that often, so I'm glad Iida seemed to enjoy her stay in Portugal as well.

As for the rest of the event, I found it pretty enjoyable, plus some of my favorite and cutest national cosplayers won a prize (let's aim for European gold), so all went well.
Posted by Joana Bernardo at 4:31 PM