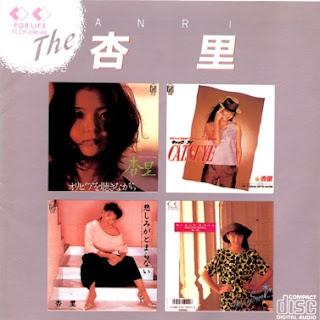 Singer ANRI/杏里 has always struck me as a lot more westernized than many of the Japanese singers from the 80s. With her tall frame (168 cm - 5.6 Ft) and dark exotic looks she could very well pass for a Japanese-American from Hawaii or perhaps other 東洋人/Non-Japanese Asian. Unlike some of her contemporaries like 竹内まりや/Takeuchi Mariya she hadn't really lived or studied in America or abroad, yet like 山下達郎/Yamashita Tatsuro and 中原めいこ/Nakahara Meiko her songs definitely have a very distinct "American Pop" sound and style. Perhaps that's why I've been a fan of hers since I first heard her songs in the early 80s.

J-Canuck has covered ANRI a lot in his previous posts including how she got her unique name and her former modeling background but I'll add some additional trivia (compliments from J-Wiki).

While growing up ANRI (born 川嶋栄子/Kawashima Eiko) was a huge fan of singer/songwriter AraiYumi/Matsutoya Yumi/松任谷由実 and often played her songs on the piano. ANRI debuted as a singer with her first single 「オリビアを聴きながら」 "Olivia O Kikinagara" in 1978 when she was still just in her second year of high school. It was a moderate hit for her at the time (and would eventually go on to become one of her signature "standards" as her popularity grew). Her followup singles weren't quite as successful although 1981's 「コットン気分」 "Cotton Kibun" would be used as a Kaoh /花王コロン 「リマーラ」 CM campaign song.  It would be another four years before she would have another hit with 1982's 「思いきりアメリカン」 "Omikiri American" which seemed to very appropriate for her and yet eerily foreshadow upcoming image changes for ANRI. It was also used by 花王 as a CM campaign song.

Wanting to change her musical direction, ANRI collaborated with Producer 梶岡勝/Kajioka Shou to go about giving her a new image, one in which shifted away from pop idol to a more mature "Beach & Surfer" type image that invoked images of "Summer". Teaming up with producer/musician 角松敏生Kadomatsu Toshiki and Folksong brother duo  岩沢幸矢/Iwasa Satsuya and 岩沢二弓/Iwasa Fuyumi AKA ブレッド&バター/"Bread & Butter" ANRI released her 4th album 『Heaven Beach』 which showcased her new direction in music.

Her next album 『Bi Ki Ni』 also produced by Kadomatsu would further establish ANRI's new American-pop and somewhat R&B Funk style. However ANRI would finally find fame with her next album, the appropriately titled 『Timely!』 which would feature the song she is most often identified with 「Cat's Eye」 as well as the sentimental 「悲しみがとまらない」 "Kanashimi Ga Tomaranai" both of which would become Top 10 オリコン/Oricon Hits for her. Oddly enough ANRI isn't too fond of the song "Cat's Eye" even though it earned her a spot in 1983's 第34回NHK紅白歌合/34th NHK Kouhaku and placed No. 1 on all the record charts for that year.  She eventually has grudgingly learned to love the song, including it in most of her live concerts as well as having it as a track in most of her compilation "best of" albums including her "My Favorite" Song collections.

ANRI recorded her next album 『Coool』 in Los Angeles and it would produce another hit for her in the song somewhat hard edged pop song 「気ままにREFLECTION」 "Ki Ma Ma Ni Reflection". After releasing "Coool", ANRI would leave her longtime Production Company マーマレード/Marmalade to go independent.  Together will some family members she would launch her own company コロニーサーフ/Colony Surf (distribution would be handled by フォーライフミュージックエンタテインメント/For Life) . During this time ANRI would also incorporate more Western influences into her music including hiring American backup dancers and chorus singers for her concerts as well as studio session musicians.  Her songs would also incorporate a lot more more synthesizer and "New Romantic" elements as well as American Rock and R&B influences. She also introduced more "Hawaiian" themes into her music and cover art (especially with later albums including 1986's 『WAVE』, 1992's 『MOANA LANI』 and 2000's 『Anri The Best』. In fact, ANRI even visited the islands to hold live concerts here in 1987 and again in 2007.

Beginning from 1987 ANRI would take a larger role in producing, writing and composing her own music and albums. She would also write songs for other artists such as 「VIRGIN EYES」 for 中山美穂/Nakayama Miho, 「FOR EVER MY DREAM」 for 芳本美代子/Yoshimoto Miyoko, 「ロマンチックでいこう」 for 石田ひかり/Ishida Hikari and 「Angel Tears」 for 松田聖子/Matsuda Seiko.

ANRI would go on her final National concert tour in 1990 and three years later release the last of her major hits 「ドルフィン・リング」 "Dolphin Ring" which was the theme song for the movie 「結婚」. In 1998 ANRI would contribute the song 「SHARE 瞳の中のヒーロー」 "SHARE Hitomi No Naka No Hero" (originally released in 1994) as the official Japanese theme song for the 1998 Nagano Winter Olympic Games.

ANRI continued to be active in music and release occasional singles up to her most recent release 2008's 「もう悲しくない」 "Mo Kanashikunai" which marked her 30th anniversary in music and proved that she still had that "American Pop" groove style.

ANRI always had an interest in fashion design and explored this hobby throughout the years as a business. In 1988 ANRI married fashion apparel designer 岸田健/Kishida Ken (nephew to famed designer 山本寛斎/Yamamoto Kansai) but they divorced five years later in 1993. After that she was engaged to marry American Jazz Guitarist Lee Ritenour (ten years her senior) in 2005 but later broke off their engagement in 2008.

While recording her first album 『APRICOT JAM』 in 1978, ANRI visited and fell in love with the city of Los Angeles, often visiting there over the years to record music. Like fellow singer/songwriter 飯島真理/Iijima Mari, ANRI would eventually move to LA where she currently resides.

ANRI has served as a "Tourism Ambassador" for the city of Fujisawa in Kanagawa since 2008.

Some of my favorite songs from ANRI like 「Good Bye Boogie Dance」 (1983) from 『Bi Ki Ni』, 「Bring Me To The Dancelight」 (1984) from  『Coool』, 「DRIVING MY LOVE」 (1983) from 『Timely!』, 「Mystery Zone」  (1986) from 『MYSTIQUE』 and 「私だけのジョーカー」 (1988) from 『BOOGIE WOOGIE MAINLAND』 are often not included and are only available in their respective albums or by getting the massive and expensive 22 CD 『ANRI IN THE BOX』 limited collectors set.

While 1986's 「ザ・杏里」 is far from being a definitive collection of her works, I like it a lot  mainly for sentimental reasons. It was one of the first Japanese CDs I bought in Japan and it has a lot of songs that I personally love that aren't often included in later albums. I also think it captures the two faces of ANRI - the "Queen of Summer" love ballads and the singer of funky American-Pop styled music.

「16ビート」 "Sixteen Beat" sounds almost like it could fit as the theme song to one of 大映テレビ's 80s teen dramas or perhaps even 「スケバン刑事」. With its great infectious up-tempo electronic beat and ANRI's haunting melancholy lyrics it easily became one of my all-time songs from her. Kudos to frequent song writing partner 三浦徳子 /Miyura Yoshiko  and composer 尾一三/Seo Ichizou for a brilliant song.


「モーニング スコール」 "Morning Squall" (1986) is often included in ANRI's "Best of" albums and deservedly so as I think it is one of her quintessential "Surf and Beach" songs with a nice R&B feel to it and a great musical hook. ANRI collaborated on this song with another female songwriter 吉元由美/Yoshimoto Yumi along with composer 入江純/Irie Jun with lyrics by 羽田健一/Haneda Kenichi. ANRI previously had teamed up with Yoshimoto/Irie/Haneda for her 1985 single 「オリエンタル・ローズ」 "Oriental Rose" which was another great up-beat song.

「ダンシング・ウィズ・ザ・サンシャイン」 "Dancing With The Sunshine" is an oddity. Written by 三浦徳子/Miura Yoshiko and composed by 小田裕一郎/Shouda Yuichiro with lyrics by 大谷和夫/Otani Kazuo it was used primarily as the ending theme to the anime series 『キャッツ♥アイ』 and was a companion piece to ANRI's song 「キャッツ・アイ 」. However for reasons that I'm still not sure why, ANRI's version was only used for 13 episodes of the series and then inexplicably replaced with a different cover version of the song done by studio background musician American(?) Kathi Linn (who sang with ANRI on the original version) with translated lyrics done by Brian Rich. While the differences aren't particularly jarring, I tend to prefer ANRI's Japanese version better for obvious reasons. The PV for this song had Kathi Linn in full Olivia Newton John "Physical" mode with her in a 80s exercise leotard outfit and headband (it could have equally been in imitation to "Flashdance" as well).


At age 51  ANRI seems to have aged very little over the years and still looks as youthful and glamorous as ever. Here's hoping that she continues to make great music and perhaps one day we will see a definitive "Best Of" compilation that will showcase not just her signature songs but also her lesser known ones as well so as to show her entire range as an artist.

Please feel free to visit my Live365 web radio station where you can hear many of the songs featured here at Kayo Kyoku Plus.

(2017: Unfortunately, JTM relayed to me that the Live365 Channel was closed down in the last year.)
70 & 80年代アイドル, ニューミュージック, 歌謡曲の懐かしい 思い出 音楽勢ぞろい.
Bringing you the best in 70/80s idol, “New Music” and retro songs.
We also play your favorite 90s and current songs as well as any requests you may have.
Just give a shout-out and we will play it.
リクエストもやります.
Posted by JTM at 3:01 AM