It wasn't only Hiromi Iwasaki（岩崎宏美） who took care of the theme songs for the Tuesday night suspense dramas on TBS. Going into the 90s, Mariya Takeuchi（竹内まりや） also made her mark by allowing a couple of her songs to be the tunes to see off the resigned criminal walk away with the sage detective. One was "Single Again" released in 1989, and there was this one, "Kokuhaku" (Confessions), released in September 1990, just a week before its year of usage as the ending theme.  Takeuchi wrote and composed the song.

Of course with that title, it was a good fit for a suspense drama. However, the lyrics were actually more centered on the agony that one goes through when one wants to confess his/her romantic feelings for that special someone. But since I never got all that interested in "Kayo Suspense Gekijo"（火曜サスペンス劇場）, the first time that I'd actually heard the song was in the Numata City (Gunma Prefecture) equivalent of a Canadian Tire household goods shop. It got played on the speakers overhead while I was looking for a decent tool kit...I guess there was a certain kismet to the situation; tools were often used on the various episodes of the drama....just not in the way they were supposed to be used. Anyways, it had been a while since I heard Takeuchi's voice so I didn't pick up right away who the voice belonged to, although the richness did ring a bell.

Nope, I actually had to come across the end credits of the show one Tuesday night to finally realize it was Takeuchi. One visit to the CD shop later, the single was in my hands. Listening to it, it seemed like a melodic cousin to her husband's recording of "Endless Game", another somewhat melancholy song of the heart released in the same year as Takeuchi's ballad, and itself a theme song to a drama.

"Kokuhaku" peaked at No. 3 on the Oricon weeklies and became the 51st-ranked single of 1990 selling half a million copies. It has been a must-include on all of Takeuchi's BEST compilations, but her 19th single came out on the original album, "Quiet Life" in 1992. 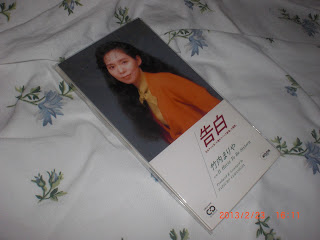