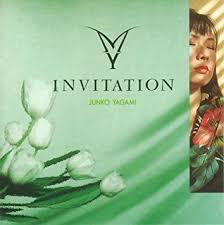 I bought Junko Yagami's（八神純子） 13th album, "My Invitation", just a month after its May 1990 release. I remember the purchase quite well since I did it in Kobe during the JET Programme's Renewers' Conference there at the grand Portopia Hotel on Port Island. I don't have much memory of the actual conference itself....a lot of workshops and stuff. But I enjoyed the modern, wide-open feel of the area surrounding the hotel. Lots of wide avenues and modern skyscrapers. And the neighbourhood around Sannonmiya Station was pretty spectacular with this mighty dramatic slope soaring up from behind the station. Within walking distance from the station and going up that hill was Ijinkan（異人館）, a lovely cluster of the 19th-century residences of foreign traders. I would love to go back there again someday. For someone who had been living in the Gunma countryside (and as much as I loved Tsukiyono-machi) for the better part of a year, it was great walking in such a beautiful city. I think Port Island may have given some of those urban planners behind Tokyo's Odaiba district some inspiration.

Anyways, onto the album. When I was going through university in the mid to late 80s, I did buy a couple of Yagami's albums on audio tape after falling for her music via "Sounds of Japan". One was "Yaga Mania" from 1986 which had the singer taking on a more straight-up American pop sound circa that time as compared to her Latin/disco-infused material when she had first started in the late 70s. When I came across "My Invitation" at the CD store, I was struck by the pale green colour and a slim Yagami seemingly basking in the sun in the colourful dress. And of course, since I was a Yagami fan, I wanted to hear what she had to offer.


The first track, "Utsukushii Yokan" (美しい予感....Beautiful Feeling), hit me immediately. It was this pleasant mid-tempo R&B song that reminded me of the Quiet Storm of Anita Baker, although I admit that the voices of Yagami and Baker are quite different. It just got me happy right off the bat, and Steve Madaio's trumpet during the bridge was a nice surprise.


Another track that I enjoyed on the album was "Hollywood wo Yume Mite", （ハリウッドを夢見て...Dreaming of Hollywood）a languid pop ballad. All of the songs were written and composed by Yagami, but she had some extra help in the melody by her husband, John Stanley who also produced "My Invitation". As you might hear, there is that sense of Motown via Ashford & Simpson in melody and lyrics which are all in English. Not sure who was partnering with Yagami in the song since the liner notes were a bit non-specific...it could have been Stanley or a fellow by the name of Rege Burrell.

The album overall is, as the first couple of songs above, a mix of AOR/R&B tunes. Nothing earth-shatteringly revolutionary but a solid Yagami album for me. It's something to hear during that sunny Sunday over an Orange Mimosa (a bit tongue-in-cheek with that last statement there). The above song here is another ballad titled "Minami Kaze"（南風....Southern Wind) which has also been labeled as a tribute to Nelson Mandela.

In any case, "My Invitation" rather imprinted itself on me as my own little soundtrack for the Kobe business trip....or government-paid vacation.