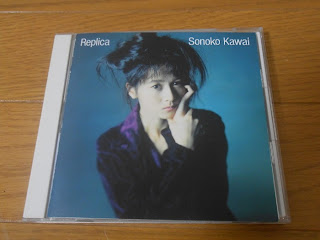 Like I mentioned in the "Jessy no Higeki" entry, in 1987 Sonoko Kawai (河合その子) began her transformation from a girl-next-door singing ordinary songs to an artist with a passion for songwriting. By the time she released "Replica" in 1990, on which she had produced and composed all the songs, she decided to retire from the music industry. There've been rumors since then speculating her return, but alas, only rumors they were.

About a week ago while taking my usual stroll on a bike through the quiet side of Gifu City, I dropped by a used CD shop and picked up this lovely album there. Though I've listened to it before thanks to the wonders of torrenting, it felt nice to actually have the real thing in my hands after all these years. It's a great album, really, though that won't be obvious at first because many of the songs are of a slower variety. The first time I listened to this, it passed me by like a breeze so I gave it a few more plays while running some errands in the background. It eventually stuck to me. It's not the kind of album that screams "I'm awesome!" right from the get-go, but rather grows on you as you start noticing all the neat subtle details that Sonoko slides in there.

Case in point, the opening track "Hitotoki no Mirai" (ひとときの未来) is a song that glows brighter as it progresses. Calming verses, elegant chorus, stunning piano bridge. It's actually pretty simple, but I adore the way everything ties together. It's like a mental soundtrack for spending some solitary time on a shore during sunset. Sonoko's wistful tone gives it even more elegance. She was never a memorable singer as an idol, but since then her vocals have matured on both technical and emotional level. You can hear it clearly on this track. It's also the only song on the album where she wrote the lyrics.

My favorite track on this album is probably the third one, "Sayonara no Uso" (さよならの嘘), and it's the one that stood out the most upon first listen. Right from that saxophone solo, it takes you away from the seaside of the first two tracks as you now find yourself at a nighttime lounge bar in Tokyo. There's also some welcome Latin flavor thrown into the chorus. The introspective mood still remains, as the protagonist in Yuko Morimoto's (森本抄夜子) lyrics laments over the breakup of an unstable relationship while picking up the scattered pieces to make herself stronger. I made a note above on how Sonoko's voice has changed over the years. Well, she barely sounds like her young self here as she sings in low register and lets out some pretty long notes.

The fourth track, "Setsuna de Odoritai" (刹那で踊りたい) carries over the nocturnal vibe from the previous song, just with more beat and without the jazz. I actually have nothing constructive to say about it, even though it happens to be one of my favorites. It's just one of those songs that makes an impression without sounding fancy on paper.

The first time I heard this song, those opening piano chords almost made me expect Sonoko to blurt out "Last Christmas, I...", but thankfully I was able to retain my sanity. "Sora wo Miagete" (空を見上げて) is perhaps the most aidoru-sounding song on the album with its sparkly synths and cute melody, yet Sonoko's delivery gives it an elegant ethereal quality. It ends up soaring during the chorus. I'm not surprised that this song is considered one of Sonoko's fans' favorites as it provides an accessible balance between her early and later sounds.

"Koi wa Yasashiku" (恋はやさしく) is indeed as honey-sweet as the title suggests, depicting a couple that enjoys every moment of each other's company. The arrangement is classy and totally brings to mind a romantic scene set in a serene urban neighborhood with lots of greenery. Don't try to concentrate too hard on this song analyzing every single detail. It's slow and runs for almost 6 minutes while developing gradually into a well-crafted piece. Just let the mood carry you while you enjoy a cup of tea.

Now here's one that never fails to make me sigh pensively. The final track, "Giniro Kaigan ~Mind Lithograph" (銀色海岸～Mind Lithograph～) closes the album as seamlessly as "Hitotoki no Mirai" opens it but with an extra emotional punch. Stunning from start to finish. The clip above also provides some interesting footage showing Sonoko's growth as an artist. She always had a cute face, but somehow she looked even prettier after the passing of her idol phase. It must be the hair.

The album only managed to peak at #50 on Oricon weeklies and charted for 3 weeks. Sonoko may not have gone out with a bang, but for me this album will always remain a treasure. 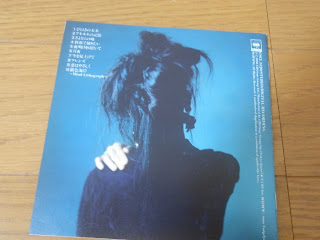 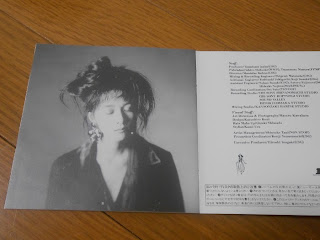