The start to "Hida no Ryu" (Dragon of Hida) is really menacing, and the rest of it sounds no less sinister with the sweeping notes of the flute. A manly song, needless to say, and who else better to sing it than the rough and tumble, gruff-looking Ichiro Toba (鳥羽一郎) with his husky growl?

Now, for this next part, imagine this with the song playing: A towering, lush mountain range with a thick blanket of white mist concealing most of it, only leaving craggy outcrops of rock visible. The sun blocked out by the grey clouds to make it more foreboding. And let's not forget a little village that got stuck in time while the rest of the world progressed at the foot of the mountains, literally at the mercy of whatever the area has to... offer. A disembodied growl is heard, striking fear into the hearts of even the bravest of souls, followed by glimpses of a long, heavily scaled body and clawed, reptilian limbs undulating in the sea of fog. Then, the creature rears its enormous head out of the clouds and into plain, horrifying - to the poor villagers - sight with flowing tendrils from its broad snout leading up to a pair of deep red, serpentine irises, before letting out an earth-shattering roar.

Well, I shall stop there before I end up writing a full monologue, and I'll leave the fate of the villagers up to you. But I suppose now you know what it's like to take a step into my mind.

Anyway, so that's what I thought of when I had first heard of "Hida no Ryu", and that's even before Toba opened his mouth! As to who had composed this nicely done ominous score, it was none other than Saburo Kitajima (北島三郎) under his pen name, Joji/George Hara (原譲二). And the one who wrote the lyrics was Chikudo Shibata (柴田ちくどう).

The song was officially released on 7 January 2015, and on the week it was released, "Hida no Ryu" decimated its competition and ranked number 1 on the Enka-yo charts. In the weeks that followed, it dropped to 2nd - beaten by Kouhei Fukuda's (福田こうへい) newest single that was initially at 2nd place - and it is currently remaining in the Top 10 at 9th place. It's highest position on the normal charts was 21st... that's amazing.

Hida is a city in Gifu, by the way, and it's rather mountainous there as well, so my description of "Hida no Ryu" wasn't too far off. But I'm quite certain that the lyrics aren't talking about a dragon that resides in the mountains terrorizing an unfortunate hamlet.

Oh, and the dragon shall be matte gold, because no other colour seems to make it look intimidating and fearsome enough. 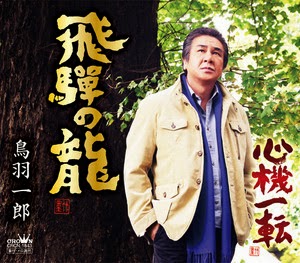