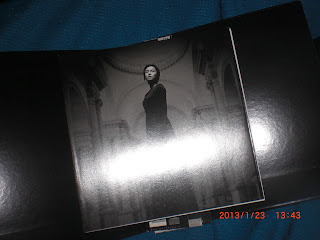 One of the more interesting albums I've bought has been "Cure" by actress Miki Nakatani（中谷美紀）. I've never thought of her as having a particularly strong voice or a voice with a large range. For example, her very first single (and a song that I heard only for the first time some years after I'd bought "Cure"), "Mind Circus", was a pleasant enough mid-tempo pop song, but it sounded as if Miki had been struggling somewhat in the refrain.

But "Cure", her 2nd album released in September 1997, was a more comfortable one for her, it seems. As an actress, she's often appeared on a number of TV dramas and movies, and often in quirky roles as characters who are just a bit off. I think "Cure" kinda plays to that strength. As you can see from the photo of the album above, Miki looks like she entered one of those avant-garde Calvin Klein "Obsession" commercials. The album itself is all in black, and there are light chiarascuro shots of half of her face (shades of Ingmar Bergman), her hand and her bare foot. Go figure.

And certainly having all of the songs composed and the entire album produced by Ryuichi Sakamoto（坂本龍一） adds to that feeling of "Cure" not being the usual pop album. However, it's not nearly as avant-garde as the pictures or the official videos may suggest. Basically, the album is split into two parts: most of the first half contains tracks that sound like indie pop ballads with a Beatlesque feeling; the second half brings in more dance club.

The first track, "Ibara no Kanmuri"(いばらの冠...Crown of Thorns) is a beautiful melancholy piece which vaguely hints through images of stardust and other metaphors to represent a romance long gone bad. Listening to Nakatani here and in almost every other song on the album, her voice delivers in a middle comfort zone. The lyricist here was Takashi Matsumoto（松本隆）.

The reason I got the album in the first place was through the videos. A lot of Nakatani's music videos got good airplay on the music channels and "Countdown TV", and had the gamine singer in various psychologically symbolic imagery. Track 2, "Tengoku Yori Yaban"（天国より野蛮...Wilder Than Heaven) is the most uptempo track in the first half, with Nakatani traipsing through what looks like an abattoir or an inspirational setting for the guys behind torture porn hits "Hostel" and "Saw". Despite the grim scenes, the song, written by Masao Urino (売野雅勇）, is a hodgepodge of funk-pop with a beatnik flute (Takuo Yamamoto from Tokyo Ska Paradise Orchestra) thrown in at the beginning and a rock guitar near the end. Miki still has to go through a bit of English boot camp with her final verses.


﻿
As I mentioned above, the 2nd half of the album has the more techno tracks. "Torikago no Uchuu"（鳥篭の宇宙） written by Nakatani, is composed and arranged by Sakamoto almost as a tribute to The Pet Shop Boys and as music to be deposited into a David Lynch mindbending movie. The English title is "My Universe In A Birdcage", and Nakatani describes her world as a restrictive domain with freedom just away from her fingertips. There's a fair amount of a "Twilight Zone" aura in both her lyrics and Sakamoto's melody. I would almost expect Rod Serling to give the final words at the end of the song. I kinda wonder if Nakatani is trying to say something about the world of celebrity.

The weirdest track on "Cure" by far is the cover version of The Carpenters' "Superstar". With a dreamy/nightmarish arrangement by Sakamoto, and a distorted version of Nakatani's voice singing the famous lyrics by Bonnie Bramlett, it sounds like something to be played way past midnight. There's almost a certain Marilyn Monroe-ness in Nakatani's delivery.


The final track to be profiled is one that brings back Nakatani from neo-Carpenters avant-gardism to good ol' techno with a tad of Latin stirred in. "Kinokhronika" is one of those titles that seems to evade definition...kinda like Phil Collins' "Sussudio". Urino's lyrics also seem to evade a regular narrative but heck, it's fun to listen to, as Nakatani pushes the pushbeats at a dash while imagining Sakamoto manning the turntables while wearing the shades and a backwards cap.

"Cure" peaked at No. 7 on the Oricon charts. Overall, I think it's one of those diurnal albums to listen to. Listen to the first half in the afternoon and then take that dinner break before returning for the second half at night.

The term New Music that Yumi Arai（荒井由実）had coined and Sakamoto (among others) had helped build into a genre had disappeared by the late 90s. But in a way, Sakamoto made a neo-New Music album of sorts with "Cure", something that can be backed up with veteran lyricists such as the aforementioned Matsumoto, Urino and Taeko Ohnuki（大貫妙子） for the last track. And even with the techno parts, Sakamoto didn't use any of the old YMO flourishes...they were neo-techno for him, so to speak. Always moving forward, never looking back.

There is a second disc included in the album which only has The Professor (Sakamoto's nickname) weaving a musical tapestry of sorts titled "Aromascape".
Posted by J-Canuck at 1:14 AM