Today I decided to talk about Wink's "Kitto Atsui Kuchibiru ~Remain~" (きっと熱いくちびる 〜リメイン〜) , one of my favorite Wink's songs. But first, it's important to make a little retrospective of Wink's career prior to the release of this song in 1991.

Wink’s music career started back in 1988 with some eurobeat inspired songs, like their first single “Sugar Baby Love” (a cover from The Rubettes’s song of the same name, released back in 1974). Also, they recorded a lot of Japanese covers from the English production team known as “Stock Aitken Waterman” (SAW), including the hit “Ai ga Tomaranai ~Turn It Into Love~” (愛が止まらない 〜Turn It Into Love〜).


1989 was their glory year. “Ai ga Tomaranai ~Turn It Into Love~” , released in November 1988, became a #1 hit, and their subsequent eurobeat singles (“Namida wo Misenaide ~Boys Don’t Cry~” [涙をみせないで 〜Boys Don't Cry〜]; “Samishii Nettaigyo” [淋しい熱帯魚]; “One Night In Heaven ~Mayonaka no Angel~” [One Night In Heaven 〜真夜中のエンジェル〜]), released in March, July and November 1989, respectively, were all  #1 hits on the weekly Oricon chart. At the end of the year they won the “Japan Record Awards” for best song with “Samishii Nettaigyo” and were invited to perform the song on the traditional “Kouhaku Uta Gassen”.

However, 1990 was not as great as 1989. The single “Sexy Music”, released in March 1990, still managed to top the weekly Oricon chart, but was the last #1 achievement for the duo. Two more singles, “Yoru ni Hagurete ~Where Were You Last Night~” (夜にはぐれて 〜Where Were You Last Night〜) and “New Moon ni Aimashou” (ニュー・ムーンに逢いましょう), were released in 1990. Both got the second spot on the weekly Oricon chart.

Apart from the Oricon ranking talk, what’s most important for us right now is the change in Wink’s sound around that time. “Yoru ni Hagurete ~Where Were You Last Night~”, second single from 1990, released in July, was the last one with typical eurobeat arrangements. Starting with “New Moon ni Aimashou”, their sound became more sophisticated and the production team behind them stopped releasing an overload of cover songs as Wink’s primary singles (“Amaryllis” [アマリリス] and “Samishii Nettaigyo” were the only two original songs released as singles prior to New Moon ni Aimashou). Not losing their 80s feel, Wink became a dance act, focused on different styles of dance-pop music, and not “JUST” eurobeat. Their first single from 1991, “Kitto Atsui Kuchibiru ~Remain~”, my chosen song for this article, is an example of Wink’s versatility. And we will see why.

Released in March 1991, "Kitto Atsui Kuchibiru ~Remain~" means "Surely Hot Lips ~Remain~". The title clearly evokes a sexy song, and the repetitive hooks "Touch Me..." and "Kiss Me...", included in the songs's choruses with the constant allusions to hot lips, only reiterate the sexiness of the song. I remember thinking that this topic was kind of risque to Wink, but after a few listens and my crescent knowledge about the duo, I concluded that this song was nailed by the girls in a very classy way.

"Kitto Atsui Kuchibiru ~Remain~" starts with a nauseating and repetitive crave for a kiss before entering the melancholic piano-driven synthpop arrangement area. I can't really tell if it's an upbeat song or a mid tempo one, because even though the verses are slow and kind of sang in a dramatic way, the choruses are upbeat and anxious with the girls almost begging for a man's touch and a "hot lips kiss". The airy "Remain" parts evoke a feeling that this intimate moment between the couple must last as long as possible. Finally, the bridge of the song offers a beautiful piano solo that just adds to the overall atmosphere of the song.

Next, let's talk a bit about the song's music video included on the top of the article. It's important to notice that the Lolita-inspired fashion, kind of Victorian at certain points, combined with some kawaii subculture elements, like the low quality earrings worn by the girls, goes along with the classical piano arrangement of the song in a very smooth way. And that's something very cool about aidoru culture in general: the image concepts created by artists and their team correlates a lot with the overall sound pursued by them, creating, in the end, a somewhat coherent storyline. We can tell that even though we live in a world dominated by cultural industry, mass produced aidorus can still make use of true artistic elements sometimes.

"Kitto Atsui Kuchibiru ~Remain~" reached #2 on the weekly Oricon chart, selling over 174,700 copies. It also reached #95 on the yearly Oricon chart for 1991. The song was written by Neko Oikawa (及川眠子) and composed by Asato Sekine (関根安里). As for the arrangement, Satoshi Kadokura (門倉聡)  was the responsible (source: generasia). Moreover, apart from its single release, the song was included on the album "Queen of Love" in July 1991. It was later an easy to find song in Wink's compilations, like "Raisonné" (1992), "Reminiscence" (1995), and the ultimate Wink singles collection, "WINK MEMORIES 1988-1996" (1996). 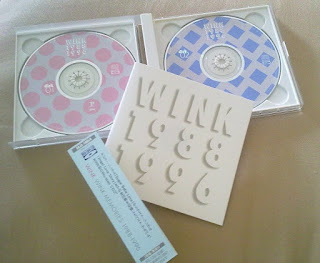