It’s very difficult for me to talk about Megumi Hayashibara (林原 めぐみ). She was the first singer I ever liked, and still is my favorite. Don’t ask me why, because I probably can’t answer this rationally. But fanboyism apart, I’m going to introduce in this article one of so many songs that I like from her: “Forever Dreamer”. As the article got bigger than I originally thought it would, it’s important to rise to the occasion: I’m going to use this particular song to analyze some of the changes suffered by the italo-disco/eurobeat musical genre in Japan from the late 80s to mid 90s.

“Forever Dreamer” was never released as a single, and it was included in Hayashibara’s sixth album, “Enfleurage”, released in March 1995. Indeed, as I check Enfleurage’s booklet, I see that the song was firstly released in the anime album “MINKY MOMO in Tabidachi no Eki” (ミンキーモモ 旅だちの駅) in May 1994, supporting an OVA (Original Video Animation) of the same name.

The song itself is a nostalgic synth-pop ballad with some reminiscent eurobeat elements  from the late 80s/early 90s popping out in the instrumental backtrack. Even the out-of-place-at-first-sight guitar solo before the last choruses sounds fine after a few listens. All in all, it’s a very charming song that rescues a particular sonority in a time when eurobeat was turning out into something quite different from the old italo-disco sound that it was labeled from. In that sense, songs like “TRY ME ~Watashi wo Shinjite~” [TRY ME ～私を信じて～] by Amuro Namie with SUPER MONKEYS and “TORA TORA TORA” by MAX, both released in 1995, are examples of hit singles released with this “new eurobeat style” (It’s important to remember, though, that both songs are covers of original Italian eurobeat songs. Those are “TRY ME” by Lolita and “TORA TORA TORA” by Domino). If the reader checks out those two tracks, he/she will probably agree with me that the “new eurobeat style”, although still made by the Italians and recognized by them as the same italo-disco, was more “frenetic” if compared with the old italo classics from mid-to-late 80s. From that point of view, I find “Forever Dreamer” kind of dislocated in time, and would not be surprised to listen it in a late 80s/early 90s album from Wink or Chisato Moritaka, as both acts were recording a lot of eurobeat tunes at the time. Megumi herself have a lot of italo-disco/eurobeat influenced songs in her early albums (“Manatsu no Valentine” [真夏のバレンタイン], from 1991’s album “Half and, Half”; “NAGARE BOSHI” [翔星 -NAGARE BOSHI-] from 1992’s album “WHATEVER”; and “DON’T SIGH” from 1993’s album “SHAMROCK”, to name a few). Some of those songs have more explicit eurobeat influences than “Forever Dreamer” which, as I’ve already pointed out, is a synth-pop ballad. However, we can’t call those Megumi’s songs “REAL” eurobeat tracks, because they were not made for nightclubs. Therefore, the final product ended having a poppier, more aidoru-oriented sound not so distant from what Japan had been doing since the 70s.

Here is the music video for “TORA TORA TORA” by MAX, an example of the “new eurobeat sound”.

Now, for comparison, I've chosen a Michael’s Fortunati song from 1986 called “Give Me Up”. This song, an italo-disco classic covered by the Japanese aidoru duo BaBe in 1987, is the first track of the first volume of a Japanese eurobeat compilation from 1986 called “That’s Eurobeat”. From that song, we can obtain an idea of what was sold as eurobeat in Japan back then.

To finish the video showout, I picked up the music video for Manatsu no Valentine by Megumi Hayashibara, an example of eurobeat influenced Japanese song with an aidoru approach. And don’t let Megumi’s lovely face and vocals forget you to pay attention to the instrumental backtrack.

Finishing the article, I can say that, for me, “Forever Dreamer” is kind of a lost gem. And, as I said before, it’s a nostalgic song. At some point of my life, I thought we had to have personal memories linked to a song to consider it nostalgic, but my father taught me that a song can have a nostalgic quality the first time you listen to it. Although I don’t remember what I thought of “Forever Dreamer” when I listened to the “Enfleurage” album for the first time back in 2005, I can say that, today, it’s one of my favorites Megumi songs, and I blame Megumi’s beautiful vocals and, particularly, the very dated synth arrangement for that.

“Forever Dreamer” was written and composed by Yuki Matsuura (松浦有希) and the arrangement was made by Masaki Iwamoto (岩本正樹). As for the “Enfleurage” album, it ranked No. 6 on the weekly Oricon charts, selling over 97,000 (source: generasia). 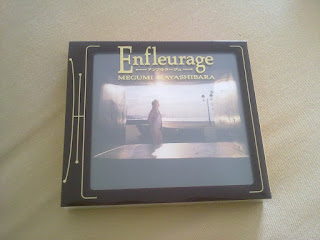 To finish the article with an image, that's my own copy of Megumi's Enfleurage.
Posted by Marcos V. at 5:03 PM