As a child prior to my immigration to Canada, I spent my summers in remote Russian villages with my grandparents where I would take every opportunity to explore the surrounding green valleys until sunset. Upon stumbling across Mimori Yusa's (遊佐未森) music online for the first time, I had these memories return in full force. I don't think it's much of a stretch to be reminded of childhood while watching the above video for "Kureteyuku Sora wa" (暮れてゆく空は). Yusa herself has that image of a character from a fairytale singing an innocent song about the beauties of nature. It's the kind of song that temporarily suspends my sense of reality and makes me believe in dreams.

Yusa is a singer-songwriter from Miyagi Prefecture who debuted in 1988 with the single Hitomi Suishou (瞳水晶) and contributed songs for anime works such as Yokoyama Mitsuteru Sangokushi and the film adaptation of The Heroic Legend of Arslan. Moreover, many of her songs were used in CM campaigns and TV programs, but no need to list all those. In 1994, she joined a short-lived ambient unit Love,Peace&Trance alongside Miyako Kouda (甲田益也子) and Mishio Ogawa (小川美潮). It was produced by none other than Haruomi Hosono (細野晴臣) of YMO fame. For much of her career, however, Yusa only enjoyed mild popularity, since her music and lyrics were considered eccentric by mass audiences. It was only in 2005 that she scored a real hit with "Kuro" thanks to the song being featured in the NHK program Minna no Uta.

"Kureteyuku Sora wa" was released as a single on September 1, 1989 and was included on her third studio album Harmoniodeon. Katafumi Sotoma (外間隆史) took care of the music, while Junko Kudo (工藤順子) provided the lyrics. Yusa would become more independent in songwriting as her career progressed. Many of her early albums are accompanied by video collections which feature her singing in dreamy natural settings. The video for "Kureteyuku Sora wa" is only one of the performances from her outdoor "concert" Forest Notes -concert with trees-. It sure is staged like one, but in place of people, the audience consists of birds and flowers.

As a bonus, here's Yusa performing "Chizu wo Kudasai"  (地図をください) on NHK's Just Pop Up. She's just so mysteriously charming. 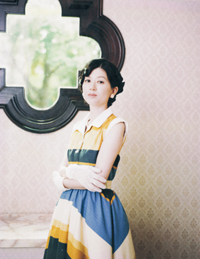