The Boom is one of those bands that I came to know during the early stages of my Japanese music adventures, but it took me a while to explore them in depth. With "Shima Uta", I initially perceived them as an Okinawan folk band. Then "Kaze ni Naritai" (profiled here) revealed that they could also give a convincing performance of Brazillian samba. Through the years, The Boom became less of a mystery to me as I familiarized myself with their diverse repertoire. Huge thanks to folks at Far Side Music for providing writeups on the band and leader Kazufumi Miyazawa's (宮沢和史) solo work. They are a great resource on all things related to Japanese music to English-speaking fans.

By the mid-90's, The Boom have already traveled far and wide for musical inspiration. They started off as a rock and ska band, then moved on to Okinawan music, explored a bit of dance music and Indonesian folk on the side, and eventually ended up in the South American realm with samba, bossa nova, and reggae. Tropicalism -0° is their most ambitious project to date which essentially culminates their South American adventures while glancing back at their rock and Okinawan music past. By that point, The Boom was no longer a four-member group, but expanded to over 20 regular musicians -- and it's the supporting members who did most of the work. Miyazawa became concerned that the album resembled a solo effort too much and that the other three members of The Boom just became a back-up band for the supporting musicians. As a result, he launched his solo career where he could freely experiment with all these Latin genres, while The Boom would take a back-to-basics approach in their subsequent releases.

After the languid "Justin", the album launches in the tropical madness that is "Tropicalism" (first song of this post). Three distinct national genres interact with each other here: Okinawan music, Jamaican reggae and Brazillian samba, engaging in a common discussion amount Third World's concerns over the disasters caused by industrial nations all over the world. Miyazawa sings the Okinawan parts in Uchinaguchi language, while DJ Catapyla provides English lines for the reggae bits. It's a stirring number which prepares the listeners for what's to come.

"Timbal Yele" is another multilingual track on the album, except this time it's Portuguese mixed with Japanese. It's got lovely percussion textures mixed with bright strings. The song is fun and danceable, but still carries over some urgency from "Tropicalism".

The reggae track "Call my name" continues with the tropical liveliness of the previous track, but this time transports you to Jamaican streets where you can hang out and sing together with the locals. The lyrics invite listeners to build bonds across national borders, similar to what the whole album strives to achieve on the musical level with its cross-cultural mishmash of genres.


With "Machi wa Itsumo Manseki" (街はいつも満席) and "Suna no Misaki -Ponta de Areia-" (砂の岬 Ponta de Areia), we are given an opportunity to relax under those palm trees and enjoy the calming breeze. The former is a cooling bossa nova number with a simple yet stylish melody, whereas "Ponta de Areia" is an Okinawan-style cover of Milton Nascimento's original from 1980. Both renditions are very soothing yet special in their own unique ways. I just love the part in The Boom's version where the saxophone sneaks in and disorients me for a moment. It's as if I woke up from a dream about Okinawa at a lounge bar. But then Yoriko Ganeko (我如古より子) starts singing, and my dream resumes.

The album mix of "Tegami" (手紙) differs from the single version above in arrangement, since it sounds more "tropical", for the lack of a better word, but that PV (sorry, taken down) is too bizarre to resist. It's more of a poetry reading set to a regular rhythm than an actual song, held together by the clamorous refrains in between. It's not my favorite track on the album, but somehow I find it hypnotically addicting. The PV must have something to do with it.

The songs on the second half of the album are, to some extent, stylistic variations of material from the first half. I'm just going to wrap things up with the tango number "Kuusou no Senjou" (空想の戦場). It's notable for being one of the few tracks not composed by Miyazawa. The band's guitarist Takashi Kobayashi (小林孝至) took care of the melody here while Miyazawa provided the lyrics. Gotta love those circular percussion rhythms, as well as Ryota Komatsu's (小松亮太) bandoneon performance. Makes me want to travel to Argentina.

In terms of sales, the album peaked at No. 6 on weekly Oricon charts. The Boom was not the first artist to inject Latin and Okinawan flavors into Japanese popular music, but they definitely helped the mass audience appreciate those genres in their purer form. As for blending music from different parts of the world:- no problem! Definitely one of the more interesting Japanese albums I've come across. 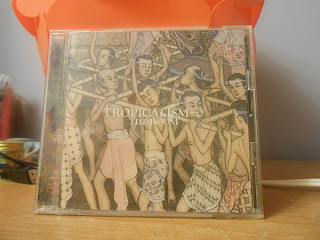