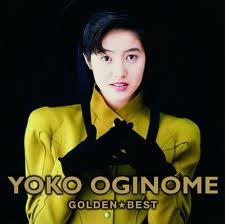 Following J-Canuck's lead with his great post on 中森明菜's 「BEST」 album, I wanted to go ahead and feature an artist who hold's a special place in my heart for she was one of the reasons I became a fan of JPop, the lovely 荻野目洋子. Oginome's 1986 album 「NON-STOPPER」 was one of the very first JPop CDs I bought in Japan. Prior to that I wasn't heavy into JPop all that much. Back in San Francisco, CA I would watch the various NHK 紅白歌合戦 telecasts but didn't really have any particular favorite artists. Once I moved to Japan, I started to pay attention more to all the great JPop artists and idols hitting the airwaves and promoting their songs on TV at the time. Oginome was one of the idols that really caught my eye. While Oginome was cute, she wasn't what you would call overly sexy. With her short pixie hair cut and slender frame she seemed more like a tomboy than a girlie-girl yet what she lacked in a distinctive look, she more than made up with her spunky personality and infectious Euro-beat inspired songs. Her cover of Angie Gold's "EAT YOU UP" was just pure "gold" and 「ダンシング・ヒーロー」 became one of my favorite songs in 1985.


Oginome was born December 10, 1968 in Kashiwa, Chiba Prefecture. Oginome got her first taste of being an entertainer when she and her older sister appeared in a 1977 film 『獄門島』 as child actors. Her sister would later go on to become the famous actress 荻野目慶子.

While in 4th grade, Oginome would enter the children's singing contest 『ちびっこ歌まねベストテン』 where she won the champion title. Scouted by entertainment agents she would be recruited into the pint-sized kid trio 『ミルク』. The trio released a couple of songs in 1979 but would disband after a year.


In Intermediate school, Oginome would audtion for a part in キティ・フィルム's 『ションベン・ライダー』 live action film. While she didn't get the role producers liked her enough to instead give her the lead role in their anime feature 『みゆき』 as a 声優. She would lend her vocal talents again to the アニメ映画 『バリバリ伝説』 and the kid's show 『ウゴウゴルーガ』.


Oginome continued to push forward her dreams of becoming a singer and in 1984 released her first single 「未来航海-Sailing-」. She would release a number of subsequent songs thereafter but it wasn't until 「ダンシング・ヒーロー」 that she finally made it big and became an overnight idol sensation.


I debated a bit which "Best" album to focus this post on. Should I go with 1987's 「POP GROOVER - The Best」 which collected most of her signature ユーロビート themed songs or should I go with  「'91 OGINOME COLLECTION」 which focused on her later 80s songs or better yet should  I go with her massive 「オリジナル・アルバム・コレクション The BOX -25th Anniversary Special」 which collects all 19 of her album releases. Ultimately, I chose her 2009 「ゴールデン☆ベスト」 which offers up a good retrospective of her music career with all of her greatest hits from the mid-80s plus a few of her early career songs and a few of her later 90s songs as well. Here's the track list:


While Oginome will always be known for 「ダンシング・ヒーロー」, I don't consider it her only great song as I like her followup dance hits like 「六本木純情派」, 「Dance Beatは夜明けまで」, 「ストレンジャーTonight」, 「湾岸太陽族」 and 「フラミンゴ in パラダイス」 equally as much if not even more so. While 「北風のキャロル」, 「湘南ハートブレイク」 and 「さよならの果実たち」 didn't have the same Eurobeat/Dance influence they were also other brilliant examples of her love for up-tempo rock/pop songs. Even with her debut single 「未来航海-Sailing」 Oginome seemed to foreshadow her Pop Idol Princess sensibilities. Yet not all of Oginome's songs were pure dance/rock numbers. One of my favorite song from her is the touching and sentimental ballad 「心のままに〜I'm just a lady〜」 which was the song Oginome released just prior to  「ダンシング・ヒーロー」 and was the ending theme to the TBS ドラマ 『愛の劇場・わが子よV』. Her collaboration with Narada Michael Walden 「Verge of Love」 also had more of a soft rock/pop vibe and showcased Oginome's English-language skills (although with a slight accent).  While Oginome tried to recapture her Pop/Dance glory days of the mid-80s with songs like 「コーヒールンバ」 and 「Steal Your Love」 in the early 90s, they weren't quite as good.


「ゴールデン☆ベスト」 could hardly be called the definitive collection as it's missing some key and notable Oginome tracks. 「Postcard from Paris」 and  「You Take It All Away」 from 「VERGE OF LOVE」 are surprisingly missing as is her non-single releases 「Melting Point」 from  「NON-STOPPER」 and 軽井沢コネクション from 「246コネクション」. Her covers of 「ヴィーナス」 and 「Cha-Cha-Cha」 also from 「NON-STOPPER」 are unfortunately excluded as well.


For completists the massive 7 CD + 1 DVD uber collection 「SUPER GROOVER THE BOX-THE PERFECT SINGLES -25TH ANNIVERSARY SPECIAL」 released in 2009 might be a better choice as it seems to have most of her A/B singles plus additional remixes and video performances. It's still missing the above non-single tracks unfortunately. A limited release item, it has since gone OOP (Out of Print). While I have the 18 CD - Original Album - Box Collection, I still definitely would have wanted this particular item, if just for the DVD bonus (If anyone has a copy of this let me know).

Oginome would eventually marry Pro Tennis player 辻野隆三 in 2001 and become the mother of three daughters. Yet as this 2011 clip of her appearance on an NHK retrospective program on her shows, she has only grown more beautiful with age and can still rock out at age 43.


(Unfortunately, the PV was taken down, but here is a performance.)


And finally here's the elaborately directed PV for 「Dance Beatは夜明けまで」. (Sorry the video has been taken down but the above is her performance on a music show)