The early 80's in Japan is a period I only know through sounds and images, but just hearing Ginji Ito's (伊藤銀次) "Baby Blue" (↑) makes me believe for a moment that I really did spend my previous life there. It's one of the classic examples of the sounds from those years. It echoes the sweet and simple melodies from American and British 60's but twists them to suit the sentiments of contemporary Japanese audiences. The breezy strings combined with bubbly synths seem to give off that impression. Judging by what I can gather from the lyrics, it's probably not a happy-go-lucky love song, but it's innocent enough not to be too heavy on the heart. I adore the chorus melody and the way Ito sings "They call you Baby Blue". The album cover you see above was created by the prolific Tadanori Yokoo (横尾忠則), by the way. Quite befitting for the title song, don't you think?

Now I'm going to back-trail a bit with a biography of the singer himself. I was first introduced to Ginji Ito while checking the credits for Ann Lewis' (アン・ルイス) songs and saw his name among the composers. Writing songs and playing guitar in the background has been his specialty for most of his career, but he did enjoy a steady solo career between Baby Blue in 1982 and Love Parade in 1993. According to J-Wiki, Ito first entered the music business in 1973 as a member of the bands Gomanohae and Coconuts Bank. In 1975 he temporarily joined Sugar Babe and contributed some lyrics to their album Songs, including the classic "Down Town". The following year, Eiichi Ohtaki (大瀧詠一) invited him and Tatsuro Yamashita (山下達郎) to sing with him on Niagara Triangle Vol. 1. This opportunity led Ito to release his first solo album Deadly Drive in 1977, but to be fair, I don't think the style there fit him much. He was probably trying to channel his bandmate Yamashita with the Boz Scaggs-inspired sound, but lacked the presence to make the songs come to life. And so, for the next five years, Ito withdrew to the background to produce music for singers such as Kenji Sawada and Mariya Takeuchi while playing guitar in Miki Matsubara's and Motoharu Sano's back bands. In 1982, he transferred to Polystar label and released Baby Blue. Now this album's style suited his ordinary looks and voice without downgrading those qualities. Rather, the songs emphasized his strong sense for pop melody. Looking back at his Niagara Triangle experience, he definitely took some notes from Ohtaki on songwriting with this one.

(excerpts from the album)

Let's get back to the album itself. Next up is "Tappin' and Clappin'", originally released as a single under the title "Makka na Bikini no Santa Claus" (まっ赤なビキニのサンタクロース.....Santa Claus in a Bright Red Bikini). The booklet provides some handy info on where Ito got inspiration for the song. He composed it with James Taylor's "How Sweet it Is" in mind and spiced it up with a Beatles-esque arrangement. The ever-present Jake H. Conception also has his moment here with a classy saxophone solo. The lyrics deal with the protagonist having "his bell jingled" by a lady on the beach who reminds him of Christmas time. There's no need to be misled by that unattractive title. The song makes me want to visit Australia one day so I can find out what it's like to celebrate actual Christmas on sandy beaches.

"Planet Girl" (プラネット・ガール) is a catchy easy-going tune featuring an infectious drum kick in the chorus. The rapid chord changes make me think of mid-80's idol pop for some reason. Once again, I consulted the album booklet for this one and found out that it was originally called "Surf Roller Street" and that Ito, thanks to the suggestion the producer Kenichi Makimura (牧村憲一), wanted it to be about two popular summer activities: roller boarding and surfing. That drum kick was intended to go with him singing "S-U-R-F~". Looks like the team abandoned the concept and replaced it with a space-themed love song.

According to the booklet, "One Way Ticket to the Moon" is Ito's tribute to Hall & Oates. It's one of the more guitar-driven tracks on the album and also the gloomiest one. Masao Urino (売野雅勇), who also wrote numerous lyrics for Jun'ichi Inagaki, Chiemi Hori, and Eikichi Yazawa, among others, presents the protagonist planning to get away from Planet Earth so that he doesn't have to loiter around his ex-lover's world anymore. As long as he's as far away from her as possible, he won't feel lonely anymore. Talk about the ultimate heartbreak... The melody and the lyrics during verses reflect that lonely feeling of one wandering through the empty streets at night (provided that those streets are actually safe).

The song closing this profile is "Shade of Summer", a mellow tune with pleasant strings and beat that evokes the mood of a peaceful summertime walk in the park followed by an afternoon tea at a cafe. The melody kinda reminds me of Beach Boys' "All Summer Long". Like J-Canuck mentioned, here in the GTA we've been blessed with another pile of snow, but to be honest, I'm already looking forward to the summer already. Would love to take this song out on my Sansa Fuze for a cycling trip through some local park trails.

Though I wouldn't call this album a classic aside from the title track, it's a pleasant listen and certainly helps soothe the mind. Makes me nostalgic for the times long gone by that I never got to experience myself. 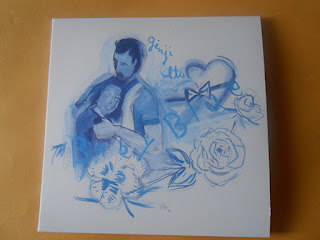