Dreams Come True's brand of shiny happy pop paid off in huge dividends with their 5th album, "The Swinging Star" (November 1992). Not only was it the most successful album by the band, but it eventually became the first Japanese-language album to break the 3 million sales barrier, and is one of the most profitable albums in Japanese music history. I couldn't find out where the band got the title from, but I think "The Swinging Star" is very well named. It reminds me of a very old Academy Award-winning song, "Swinging on a Star" first done by Bing Crosby in 1944 for the movie "Going My Way". The inspiration for the song may have been different from my impressions of it; for me, "Swinging on a Star" signaled a happy-go-lucky optimism, which is what Dreams Come True signaled during those heady days in the early 90s.

"The Swinging Star" starts off pretty ambitiously by providing a segue of sorts from their previous album, "Million Kisses", in the form of a Big Band version of "Ginga e no Fune"（銀河への船...Ship to the Stars）, the soulful ballad which ended that album. This jazzy version has been re-titled as "The Swinging Star", and with the exaggerated DJ voice, it almost sounds like an updated radio program from the time when the little device was the only means of public entertainment for the masses.


All of the 12 tracks on the album were created by vocalist Miwa Yoshida（吉田美和） and guitarist Masato Nakamura（中村正人）, with then-keyboardist Takahiro Nishikawa（西川隆宏） assisting in the melody for Track 2, "Ano Natsu Matsuri no Hanabi"（あの夏祭の花火...The Fireworks from That Summer）. It's one of my most-remembered songs from "The Swinging Star", and as the title shows, it's probably one of the favourite summer tunes for the young folks, with or without the annual pyrotechnic shows that happen all throughout the country. I would say that if an official video had been made for "Ano Natsu", the camera would have been sweeping all over a summer festival in the same way that a young naïve country girl would have been gaping at the lights on Broadway. The song is just filled with all that giddy excitement.

Track 3 makes me wonder if Dreams Come True were indeed trying to bring a bit of that mid-20th-century Americana into late-20th-century Japan. The doo-woppy "Da Diddly Deet Dee" is basically a cheerful report of a couple of newlyweds making that long-desired move into their "love nest" (there is even mention of an old Hoover vacuum!). It makes me imagine Ozzie and Harriet Nelson rolling up in their DeSoto to their new house in Smalltown USA. And the title itself just screams MIWA since she has that love of scatting.


"Sayonara" is perhaps one of the not-so-positive tracks whose lyrics state, "Two's company, three's a crowd". Miwa is basically saying that she has no interest in being one angle in a love triangle. However, she's not licking her wounds about it; the melody seems to illustrate more of a "Talk to the hand!!" retort.


For a DCT album, one of the necessary ingredients is that power ballad to show off Miwa's pipes. And "Sweet Sweet Sweet" is that soulful ballad as the 2nd-last track on the album. With the familiar synths in there, it's reminiscent of some of the earlier ballads by the band. Starting off triumphantly, the song seems to progress as if the couple in the song had undergone some major trials and tribulations before reaching that happy end. And the song was used at the end of a competition of sorts....it was the ending theme for the game "Sonic The Hedgehog 2".


Two of the tracks did come out as individual singles. One was their huge hit, "Kessen wa Kin'youbi"（決戦は金曜日...The Deciding Battle is Friday）, and other was the following 12th single, "Haretara Ii ne"（晴れたらいいね...I Hope It's Sunny）, which came out in October 1992 and reached No. 1 on the Oricon weeklies. It is also the final track of this album, and unlike the epic ballad from "Million Kisses", "Haretara Ii ne" is a mid-tempo happy-go-lucky tune. In a way, the song seems to have that honeymoon couple from "Da Diddly Deet Dee" a few years earlier when they were thinking of places to visit as a couple and reminiscing of even earlier days in kindergarten. I think the melody can describe those little kids off on a little adventure as well. The song was also used as a theme song....this time for the NHK morning serial drama, "Hirari"（ひらり）.

"The Swinging Star" is perhaps the quintessential Dreams Come True album. Happy-go-lucky tunes with those sweeping ballads, Miwa's soul with Nakamura's pop, and infectious youthful charm with some old-fashioned images. Just imagine putting the three members of the band into a Norman Rockwell painting.

On the Oricon yearly charts, the album was ranked No. 5 in 1992, and it even went up a notch for the 1993 rankings. It also won a couple of awards at the Japan Record Awards, including the Grand Prize. Dreams Come True also appeared on the 1992 Kohaku Utagassen with "Haretara Ii ne". 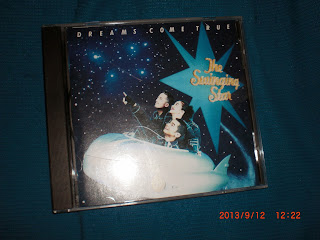