I had no idea what I was expecting when I decided to watch the MV for Keisuke Kuwata's (桑田佳祐) most recent solo single about almost a year back from now. I mean, the thumbnail seemed pretty normal and I had not yet known the extent of Kei-chan's brand of weirdness, having only just been introduced to Southern All Stars. In fact, I thought Sazan's leader was one of those normal, straight-laced run-of-the-mill singer-songwriters. Oh how wrong was I.

It started off rather ordinary, and when I said 'started off' I meant the first 3 seconds of the video before the other bizarro background characters are brought to light: Ultraman monsters, an adamant cleaning lady mopping the set while the producers are filming the video, etc. Then we have Kuwata in a white disco suit singing as though he was slightly drunk and I suppose as fan service, you've got a lady in a bikini (an AV actress) posing for the camera.With that many things going on, it kinda makes you go, "What is going on? What in the world am I watching??"

For the song itself, 'Yin Yang' has that catchy cha-cha and seedy cabaret feel to it. Combined with Kei-chan's husky, distinguishable delivery I would say that you might have a tough time ignoring this tune. In terms of meaning, it's basically about ignorantly falling head-over-heels in love with that special one, then getting bored of it/encountering various relationship bumps and eventually regretting the decision of being with her. Or well, something on that line.

Released on the 13th of March 2013 (oh wow, 13/3/13!) it did quite well, peaking at 3rd place on the Oricon weeklies and placed 7th in the month of March. But eventually it settled at 70th for the year, selling about 100 000 singles. The song was also used as the theme song for one of those Thursday dramas called 'Saiko no rikon' (最高の離婚) which means the best divorce... that's quite dark. The video below's the show's opening/closing sequence.

I remember suggesting to a friend of mine to watch the MV for 'Yin Yang' back then and I remember him saying that Kei-chan looked like a pimp - the white suit, girls around his arms - and looked like he constantly needed to puke. And no price for guessing his favorite scene... ... 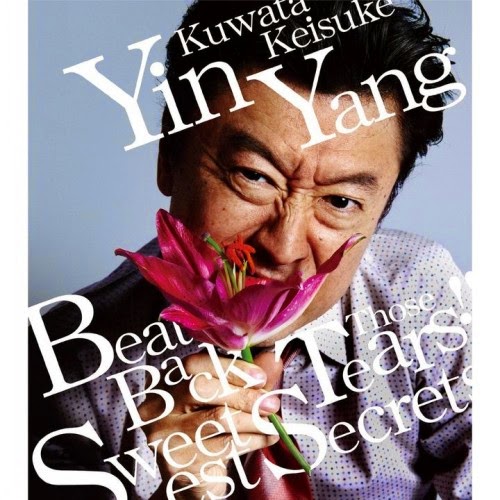 amazon.co.jp
Posted by Noelle Tham at 5:18 AM