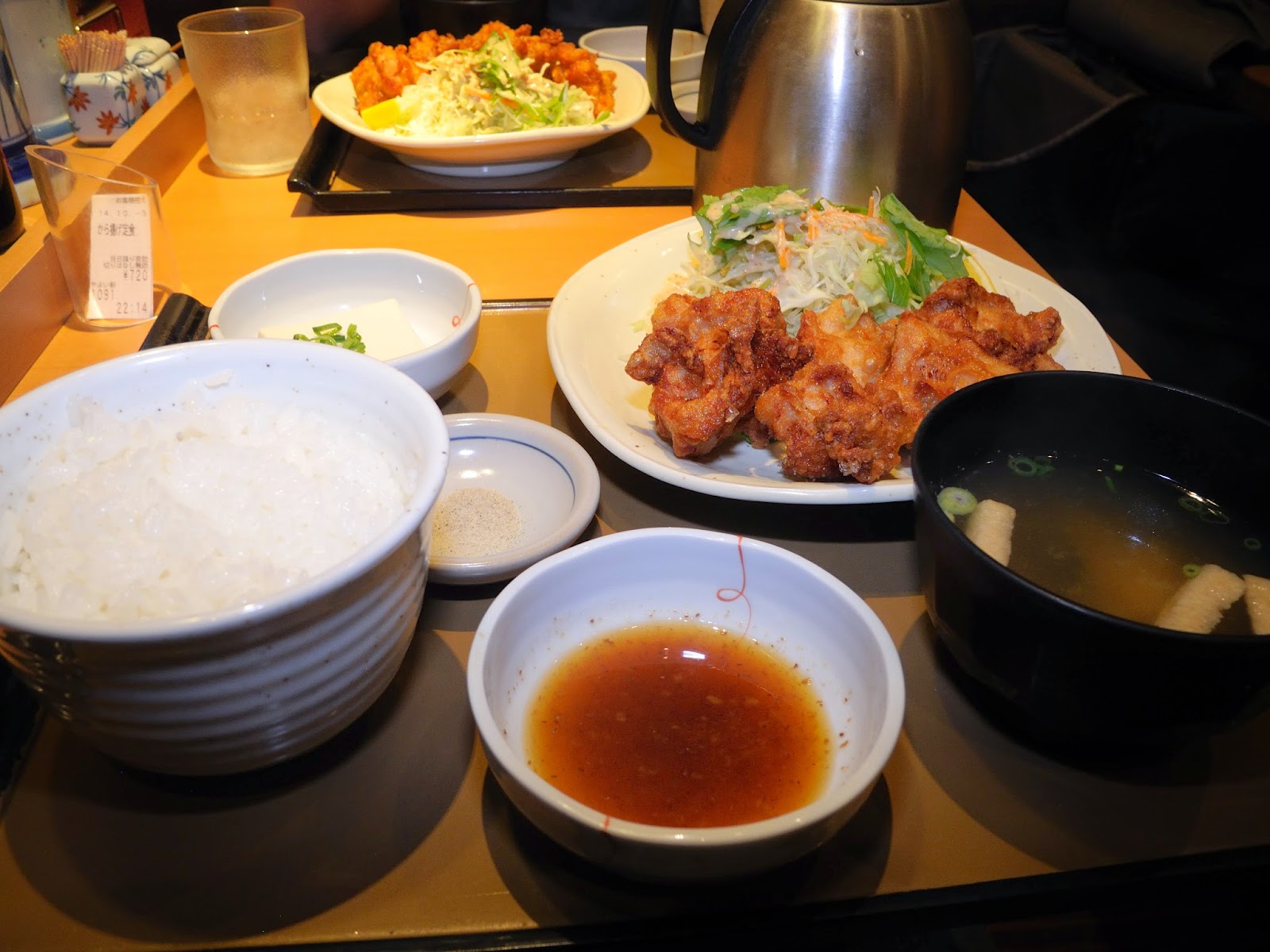 Yep, the above is a photo of my first meal back in Japan...at one of the Yayoiken restaurant franchises, to be exact, right by the Toyoko Inn near Tawaramachi Station. As would be the case going from Toronto to Tokyo non-stop, it was a long and arduous flight, and so after taking a 10,000-yen taxi ride from Haneda Airport to the hotel, I was pretty much done for the day. Happily, my anime buddy was already there in the lobby and he was kind enough to drag me over to that Yayoiken for a beloved teishoku of karaage (Japanese-style fried chicken), perhaps my favourite food there. And the whole meal cost a mere 700 yen with free refills of hot rice, miso soup and green tea.


"Koufuku Graffiti" (幸腹グラフィティ...Happy Cooking Graffiti) is another one of those slice-of-life anime that I've come to realize that I have an affinity for (another is "Gochuumon wa Usagi desu ka?"). There is no major story arc about battling robots/magical girls/mind-twisting concepts (although I have no big issues with those anime); it's just a small group of amiable characters getting together for some happy and kooky times.

This particular show is centered around one of my favourite topics...food. And knowing that the Japanese are also huge foodies, there have been a fair number of anime about the topic but "Koufuku Graffiti" is the first one I've been watching during its first run, and perhaps it's the first somewhat moe one. Along with the gorgeous, lovingly animated dishes cooked up by the main character of Ryo (Rina Sato...佐藤利奈) for her good buddy Kirin (Asuka Ohgame...大亀あすか), the show is also notable at how...seductively...the eating scenes are portrayed.


In any case, the opening theme is "Shiawase ni Tsuite Watashi ga Shitteiru Itsutsu no Houhou" (The 5 Ways I Know For Happiness) by singer-songwriter/seiyuu Maaya Sakamoto（坂本真綾）. One reason I gained a liking for it is that Rasmus Faber's music takes me back to some of the mellow pop songs that I heard in the early 2000s by folks like bird and Miyuki Hatakeyama（畠山美由紀）. The lyricist here is Yuuho Iwasato（岩里祐穂）who wrote a lot of Miki Imai's（今井美樹）songs in the late 1980s and into the 90s. So, there is some pretty high-powered songwriting. Basically, the song provides for a nice and smooth entrance to another foodie adventure with Ryo and Kirin. It's rather like good background music for a date at a morning cafe. By the way, Faber was also behind another catchy but different anime theme.

Now, I couldn't finish off the article without providing the second anime earworm in a week here. At the end of each episode of "Koufuku Graffiti", there is the short intro to what the next episode will be but instead of showing scenes, there are 30 seconds of a nicely presented dish and chibi-Ryo and chibi-Kirin swishing and singing and scatting adorably. Supposedly the very brief ditty is called "Shiawase Graffiti"（しあわせグラフィティ）and Akina Shinkoda's（新小田明奈）lyrics consist of just "tsukuru" (I'll cook it), "taberu" (I'll eat it) and "doo-bee-doo-bah". Ran Kumagai（熊谷蘭）came up with the laidback guitar accompaniment. It's apparently become quite the squee-worthy video on YouTube.

I'm not sure when the soundtrack or even the singles will be coming out from this show, but the odds are very high that my anime buddy will be one of the first to acquire them.