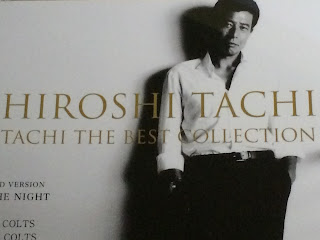 Although I must admit that Hiroshi Tachi (舘ひろし) doesn't sing particularly well, he does have a deep, soothing voice and I'm glad that he had recorded a number of songs over his 40 years in show business. As someone who would rather not watch serial dramas, even those starring him, due to my tendency of binge-watching - not a fan of suspense in all sense of the word, so I'd want to get it over and done with - it's a good way for me to see the actor-singer... Wait, no that doesn't sound right - hear him. Hang on, come into contact with him? Oh whatever, you get the point.

Anyway, when I began to take an interest in Tachi, music.163 was still up, enabling me to sample some more of the actor-singer's musical works that YouTube doesn't have as the site had songs from "TACHI THE BEST COLLECTION". Those found in this 2005 compilation album are listenable, and I'm very fond of the music from a handful of them as I find them comfortable and relaxing - something to note is that most of those were composed by the man himself. "Yoru wo Kakeru Omoi ~THE ONLY ONE~" is one such example.

Despite me discovering "Yoru wo Kakeru Omoi" much later than the other tracks, my liking for it quickly surpassed that of the others. It moves along at a steady pace with the electric guitar revving away in the back and occasionally making itself known but not in an excessively loud manner, following which is Tachi's laid-back vocals. Makes me think of the fellow riding on his bike along a long, empty stretch of road at dawn when the sun begins to rise, with a pair of shades and the wind blowing through his hair and that smirk on his face. Ah, that's so cool.


Moving on, so when music.163 closed down, I wasn't able to find this song anywhere else (or so I thought), which led me to get the aforementioned album late last year just so I could listen to "Yoru wo Kakeru Omoi" again. Though there's no loss in doing so as I could also revisit the other tracks again and have a couple of pictures of Tachi from the lyrics booklet and the jewel case, I only realised a few days ago that I could've listened to it on YouTube, the one place that I ignored as I assumed it wouldn't have a song that uncommon, in the very video above. I really underestimate YouTube sometimes. Part of me was happy that I found it as it meant that I could share it with you guys, but the other part of me is pinching my nose bridge at the fact that I missed something that was literally right under my nose this whole time.

"Yoru wo Kakeru Omoi" was written by Tachi as well as lyricist and essayist, Yumi Yoshimoto (吉元由美). It was released on 2nd February 1994 as the B-side to "Naze "(何故〜I DON'T WANNA SAY "Good-Bye"〜) - now I'm curious as to how that one sounds like - and used as the theme song to the movie "Menkyo ga nai!" (免許がない！) that had Tachi in the lead role. Seems to be about an actor learning how to drive for his role; the commercial is in the video below. He looks so cute with those glasses.


Just a bit of personal trivia to round things up. The Marutama Auntie (Japanese lady who runs the ramen joint; I've mentioned her before) said something that caught me off guard when I mentioned Tachi the last time I saw her a couple months ago when I went to Marutama for my menchi-katsu fix. Usually it's a bewildered "Ehhh?" or "Why?" which I find thoroughly amusing. Instead she went "Ah, Tachi Hiroshi! That one I can understand (why you fancy him)." It was my turn to be at a lost for words and be the one who's genuinely surprised. That's the first time I've heard such a thing when aged artistes are brought up. And then again, it is Tachi...
Posted by Noelle Tham at 6:27 AM